by Matt Button on 12th December 2018 in Interview, Surf
Time to read: 4 minutes

House of Beyond caught up with professional athlete Andrew Cotton between yoga and 60th birthday parties in Portugal.

How is Nazaré today?

Not too nice, but the sun is out and it’s good to be back.

What are you doing on your day off?

I don’t think there is such a thing as a day off is there? It’s continuous I think 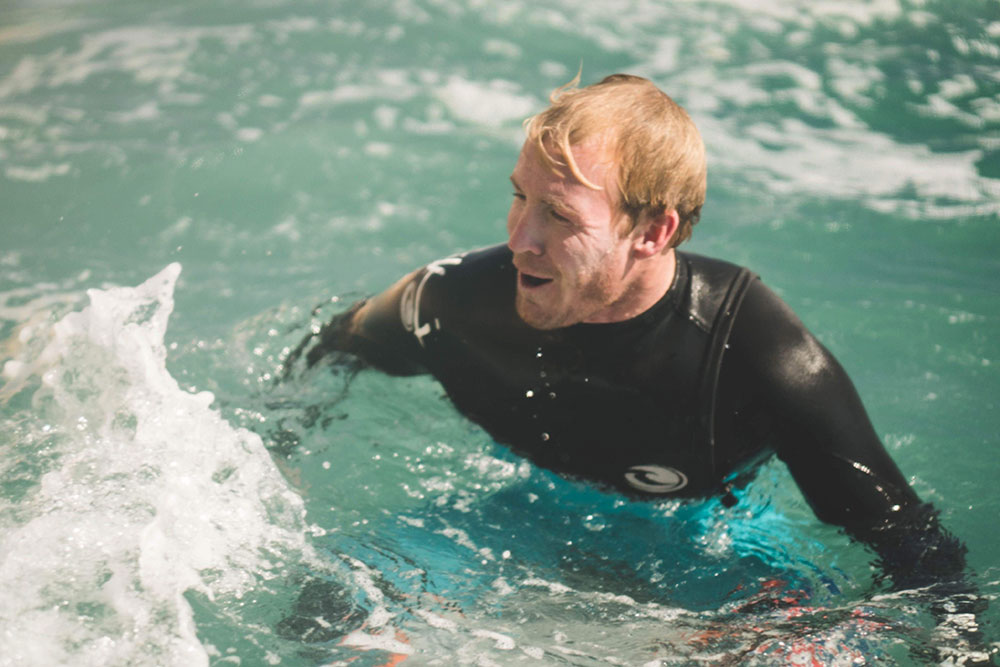 When I was growing up professional surfers were either in competition or partying hard, often simultaneously. Those days are probably gone right?

Greg Long is very open and speaks articulately about his challenges getting back in the water after his near drowning. Did you struggle much?

At first the few times, yes. But I started at home in Devon, just started getting my body fit. Coming back to Nazaré there were a lot of questions and soul searching. But it quickly becomes apparent that you’re doing it for the right reasons, cos you love it! Once you start challenging that fear it get puts in to perspective.

I’ve got a young family, I’m not on a suicide mission

The second you get out there and get a wave the worries vanish. Then you want another wave, then a bigger one. So it’s kind of like, for me, it was about just being back in the water, in the environment and feeling more comfortable.

Of course it doesn’t happen with the click of your fingers, obviously it took a few sessions. We were quite lucky here as it was a slow start so I was able to build it up rather than go in at the deep end. 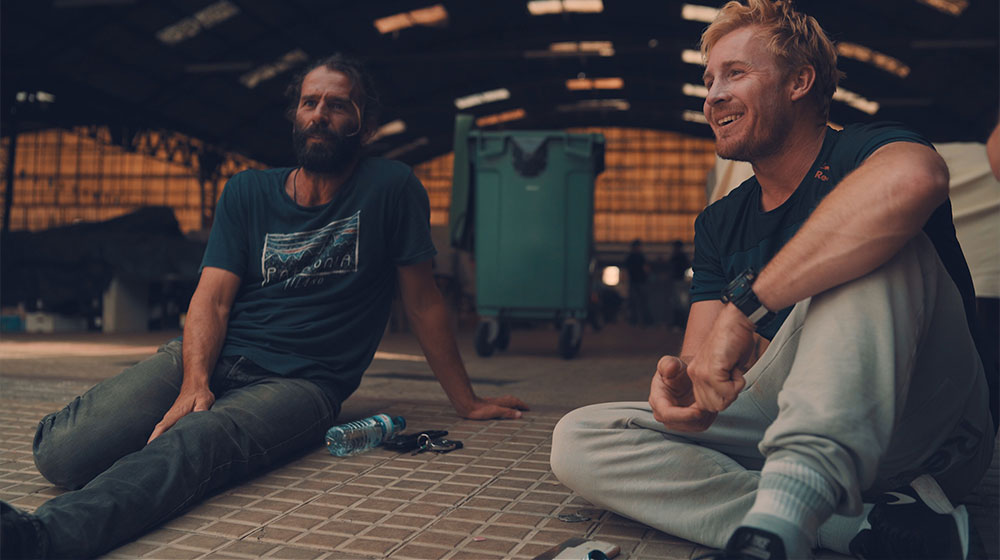 In the Red Bull clip we see you saying to Garrett [McNamara] that you’ll just drive the jet skis to begin with.

Yeah, but bear in mind that driving a jet ski at Nazaré is often more dangerous than surfing, but it was just being out in the ocean. Seeing it.

Mentally it was just being out there, it was a nice way to ease your way in. Obviously I’m a surfer, you’re gonna want to get a wave. I’ve been giving myself little targets and goals, taking easy but still pushing. And it seems to have worked. My body is feeling good after all the physio and rehab.

It seems the days of the ‘Hell Man’ are gone. Big wave guys these days seem to be calmer, centre, more professional. The days of the nutcases are gone?

(Laughs) I don’t know. I know what you mean, those loose or crazy guys, but for me I hate the words Adrenaline Junky. It isn’t that, it’s almost like meditation.

When you get the most critical, crazy ride of your life then time slows down and that’s a type of meditation, it’s hard in everyday life to be that focused and that in the moment. And that to me is the addictive part. I wanna revisit it over and over again, getting back in the Zone.

I wanna distance myself from the uncalculated risk taking.

Less throwing yourself over the ledge more professional athlete?

You’re literally putting your life in other people’s hands

Yeah, but also in your own hands. I’ve got a young family, I’m not on a suicide mission. I wanna surf big waves and I’m always thinking about the next wave. It’s alway moving forward, getting bigger. It takes dedication and commitment.

Do you think there’s an upper limit to what can be ridden?

Nope, it’s ever evolving. That’s one of the exciting things about surfing, it’s continuous. It’s not like mountain climbing, once you’ve done the biggest mountain it’s done. Waves are always getting bigger, new spots being found.

The boundaries of what can be ridden are constantly being rolled back. And the boundaries of what the human body can take. The impact on the body from a fifty foot wave… I can’t describe it. We’re basically putting our bodies through car crashes and then getting up and doing it again. It’s mind-boggling how far it can go.

There are no courses that will prepare you for the real world. If you don’t have the passion then you won’t get up after these horrendous wipeouts. You have to be prepared to get caught inside, hammered, crazy hold-down’s, thrashed  about all for a few seconds ride of actual surfing. It’s closer to rugby, more often than not you get walloped each time you go out. 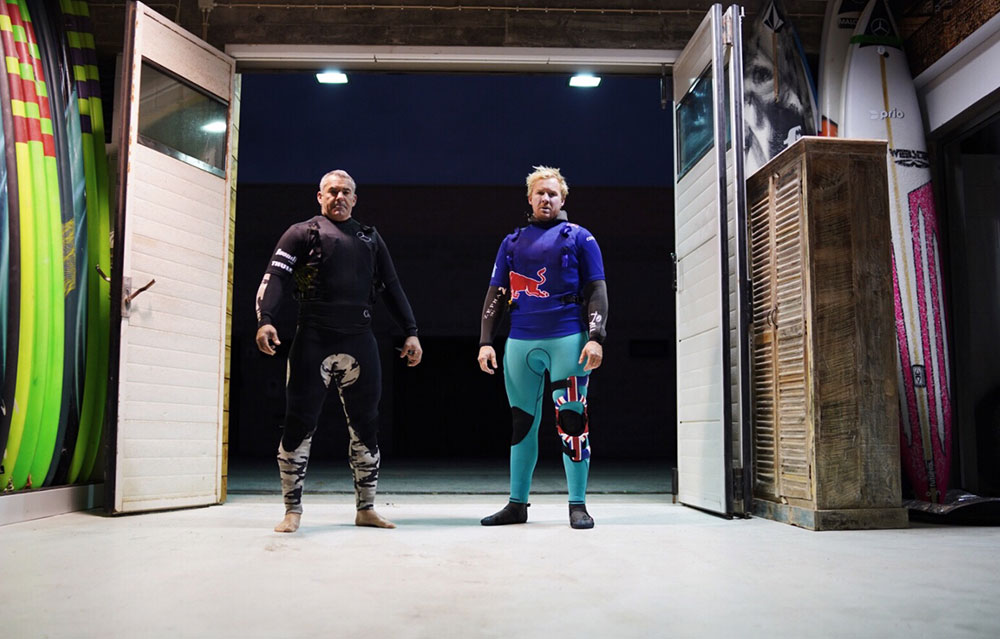 Do you think that could be the limiting factor for a while, how much the human body can take?

Yeah, but for me, it’s surprising. When you start bring your training in you can start prepping for that. Looking at the younger kids who throw themselves in at the deep end I think ‘how long can their careers last?’

Your body cannot take that pressure forever. So for me I’m get there at my own pace. I’m 39 now, will these young guys be doing it at 39? I don’t know. I definitely wasn’t doing that at 21.

It’s a bit like John John [Florence], his injury could have cost him a couple of world titles.

These guys are going so hard, so high and so fast and landing on flat!. What’s it doing to your hips, knees and ankles?

Unless of course you’re bionic (laughs)!  Experience tells you that sometimes you’re putting everything on the line, but I try to be generally conservative. Sometimes I’ll just go for it, but I don’t want to be stupid .

Yeah, I’d never paddle for a wave half-heartedly. If I’m going then I am going! I’ve already made the wave in my mind. There’s nothing worse than hesitation, with anything you do. It often goes bad if you do. It’s a mindset thing- all or nothing!

Is that carried over into your professional life out of the water?

With training and life in general, yes. If you’re gonna do something it’s worth doing properly.  You have to commit.

From curtains to kings: The story of Alder Surf
Hitting the highlights
Threading the needle with Timmy Reyes: High speed greed
Brazilian Storms
Share this...