The slabs of Ericeira

by Matt Button on 8th October 2018 in Surf, Travel
Time to read: 4 minutes

Portugal has a massive open secret.

Type ‘Portugal’ and ‘surf’ into the search engine of your choice and you’ll get ‘Peniche’. In fact the peninsular sweeps the board on the Google search thanks mainly to Supertubos and the WSL.

After decades of seemingly invisibility Portugal is permanently on the world tour and Supertubos, the ‘Portuguese Pipeline’.  is always exciting stuff. 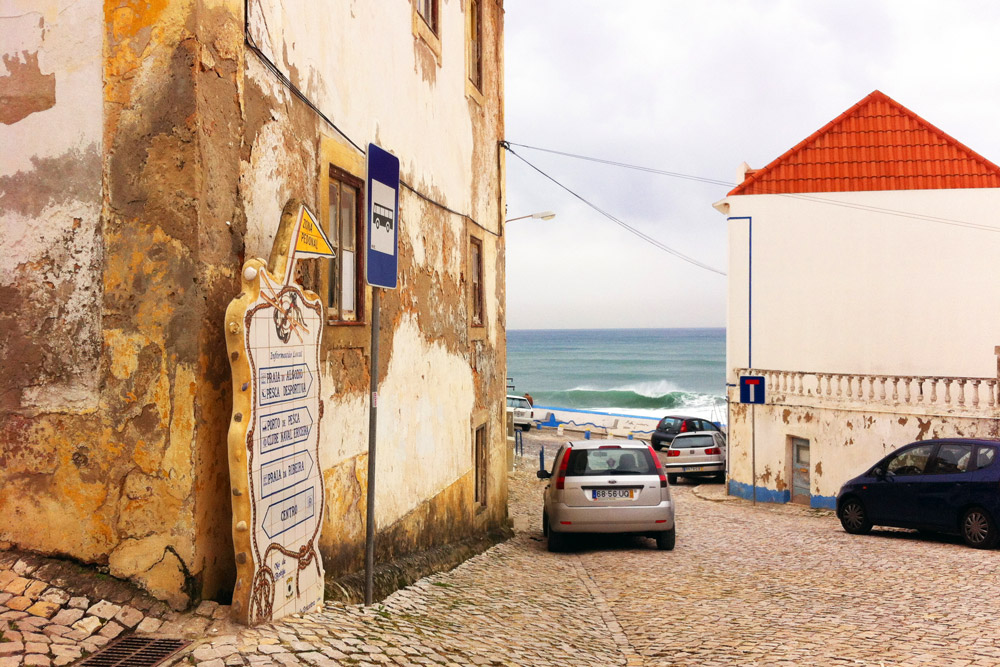 The Praia do Norte (North Beach) in Nazaré

‘Peniche is okay’ says Renato Afonso of the Ericeira Surf Center. ‘It has lots of bays and quiet spots so lots of different surfers can still get wet. But Ericeira is open to the ocean. Whatever the Atlantic throws at us we surf’.

Without the British Isles to get in the way and muddling up swells Portugal is blessed with surf from every direction. North, west and southern swells unloads into the coast; unfiltered, unabashed and untamed.

From where I stand on the cliffs outside our rented flat, triple overhead sets detonate off the reefs and points as far as the eye can see. To the north the point at Pontinha is slamming into the bedrock. Looking not unlike the Bra Boys ‘Ours,’ it’s unsurprising there are few takers. As I follow the peaks south along the pristine coast ferocious pits and points reel off limestone cliffs or punch angrily at rock ledges beneath sleepy Ericeira.

The white washed village sits paternally looking misty eyed out over the wild Atlantic. It watches over the traditional fishing boats as they head out to work and those returning in the dawn haze. Only the fishermen and surfers are up at this time. 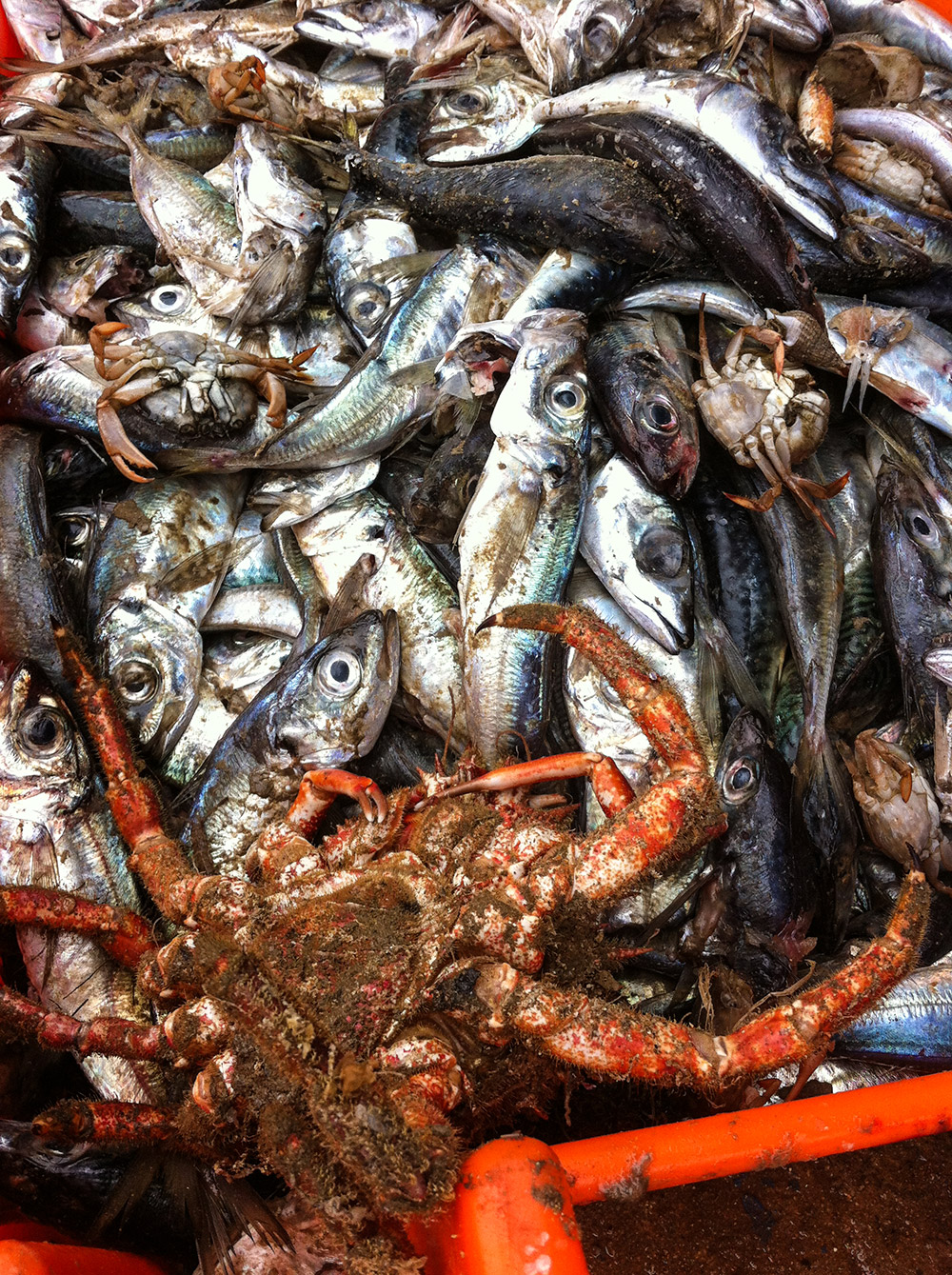 The country has a long and illustrious history of seafaring. Gulls wheel overhead today just as they had when Vasco de Gamma set out for unknown India and Pedro Alvares Cabral’s accidental discovery of Brazil. Portugal’s maritime culture permeates everything; its food, music and language.

Yet surfing in Portugal was slow off the mark. Although surfed as early as the 1950’s it wasn’t until the seventies that things really got moving. Three years after the Salazar fascist dictatorship finally curled up and died the first Portuguese surf contest was held at Ribeira D’Ilhas in 1977.

That’s where I should have gone, Ribeira D’Ilhas, a beautiful long right that peeled along the Iberian cliffs doing a fine impression of Bells Beach. I should have listened to Renato. Instead I tried a spot called ‘Slaughter House’. Sold to me by another local as ‘sort of mellow when everything else goes nuts’. The clue, I suppose, was in the name.

The second was that both the Reef and Backdoor were exploding off the point without a soul out. Mistakenly I paddled out at Pedra Branca one of Portugal’s best waves on a good day but a boiling mess of bitter suicide today. An hour was spent desperately duck diving wild sets that attempted to skewer me on the urchins or thrash me against the geology.

Beaten and bloodied I returned to the beach, whipped but breathing.

In an effort to retain some pride after my thrashing in front of my partner and her dad I suggested we retire to a seafood restaurant where I could hide behind a plate of Caldeirada de peixe (fish stew) or Pastel de Nata, because sulking with your mouthful is only slightly more dignified. 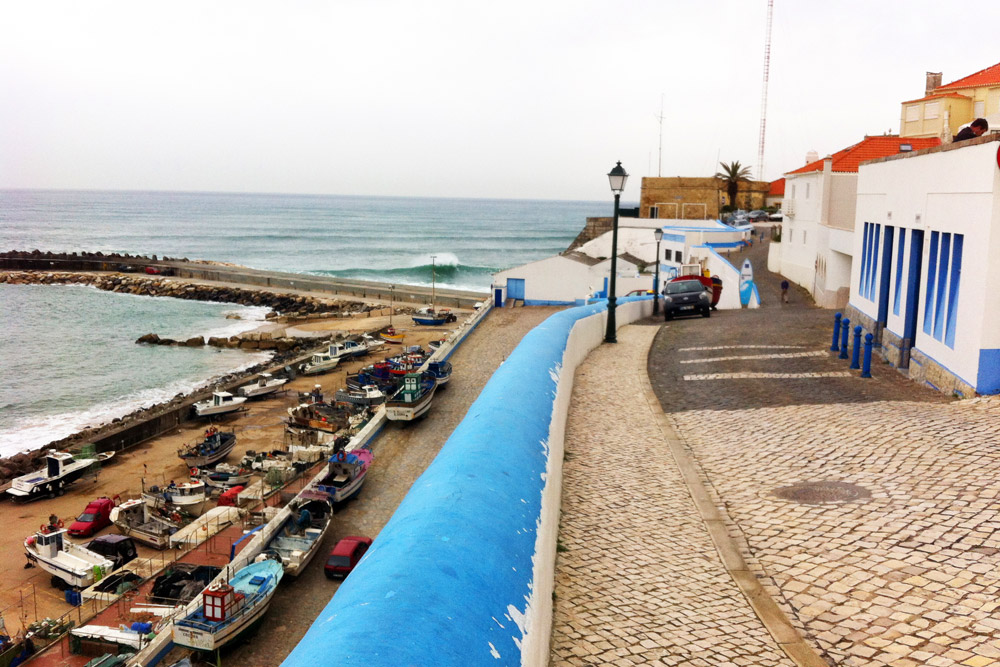 Walking through the cobbled streets I caught glimpses of peaks along the Praia Do Norte. Huge empty barrels threatening me between whitewashed cottages guarded by saints. No one was out, just the gulls and the fishermen. In the quiet of spring only old men, gathering to thrash out the problems of the day, wake the sleepy alleys.

The fishing boats wobble in and out of the harbour as they have done for centuries. Cats silently prowl the docks hoping to get lucky. It’s hard to believe in this peaceful little town that Lisbon, Portugal’s rambunctious capital, is only twenty miles away.

Retreating to the Marisqueira Furnas restaurant to lick my wounds we ordered a whale-sized seafood platter and a nice Alentejan red. As the calamar, lagosta, and barnacle de ganso arrived events from Portugal’s faded empire beamed into the restaurant in between clips from the winter.

On screen Garrett McNamara and Andrew Cotton juddered their way down 90ft of Atlantic wrath and a lifeless Maya Gabeira was dragged to the beach and resuscitated on the sand. I pointed out that Nazaré was just twenty minutes up the coast. It didn’t cut the mustard with father and daughter.

Thankfully any further humiliation was spared by the arrival of an octopus the size of the Kraken. As brutish peaks push along Furnas into the Praia do Sol Mr. Octopus was eviscerated and dipped in sauce. 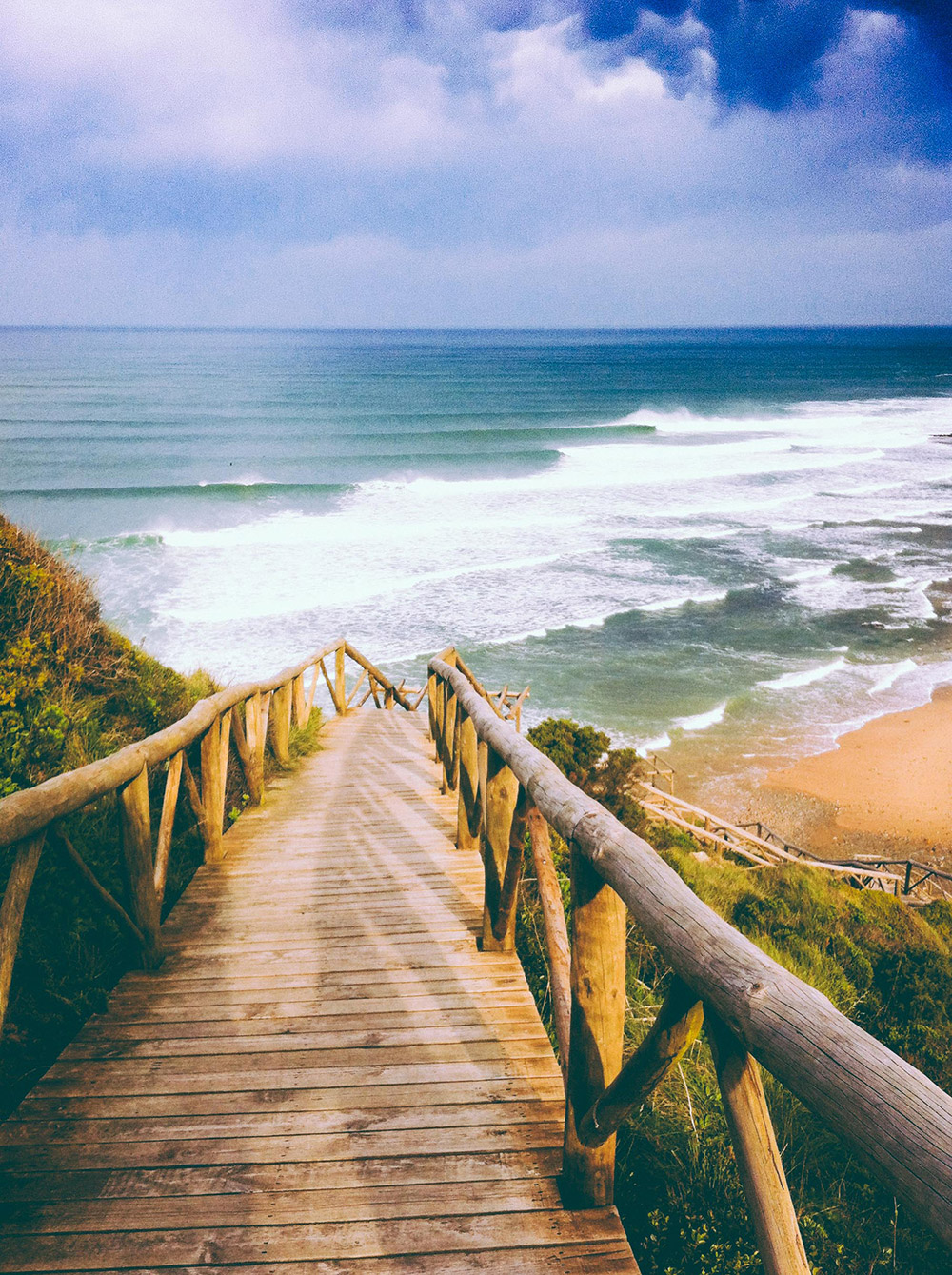 In the cool of a new dawn the ocean has quietened a little. Some of the anger has smoothed and the death slabs of yesterday have become the heaven of today. Where to go? São Lourenço with its resemblance to Hawaii’s Sunset Beach? Coxos, a freight train right that some say is Portugal’s best wave.

Crazy Left swallow fast and the natural home of urchins and kamikazes? Or south to the empty sand banks of São Julião? Within these eight km of sandstone coast Ericeira has everything a surfer could want. There are point breaks, slabs and fun beachies, world-class food and wine and the friendliest locals I’ve ever met.

CPR on the beach isn’t my thing. I would leave the death and glory to those who wanted it. I’d rather channel my inner- Machado so in the end I padded down the wooden steps into the home of the Portuguese nationals and WQS events, Ribeira D’Ilhas.

Nodding to a local, he smiled, offered a thumbs up and we tiptoed our way through the submerged boulder field just as perfect head high walls peeled through the dawn light. Portugal might just be Perfeito! 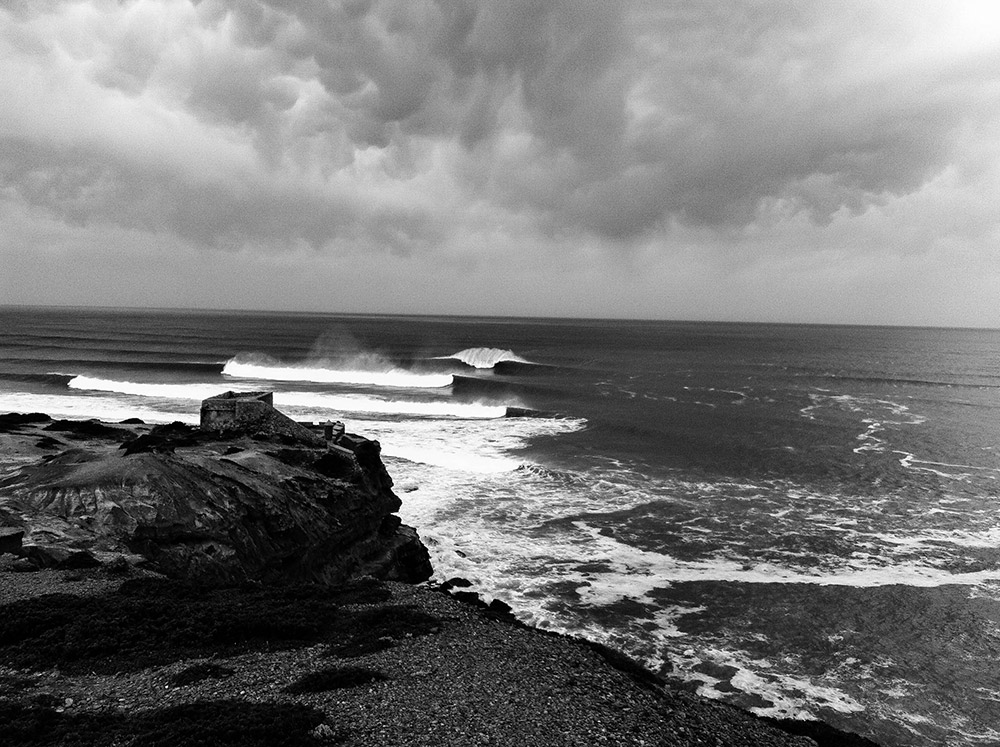