A gripping and gruelling World Surfing League title battle comes down to numbers, know-how and nuts on Hawaii’s North Shore.

Never ever get between Gabriel Medina and a world title.

The Pipe Masters and the end of the WSL 2018 title run at Ehukai Beach Park came down to the quarter finals.

Slater was chasing an eighth Pipe Masters. On his way there the freak fell off in the barrel, caught his board and pulled it underneath himself, remounted and pulled out of the barrel!! Oh and he was nearly dethroned by an escaping bat ray. He also ended third place Toledo’s dreams of a title. Not bad for a 46 year old.

But things went apeshit in the quarters

But things went apeshit in the quarters. Conner Coffin started off with a pair of beautiful backdoor waves and within minutes had Medina comboed. If he was knocked out, second place Wilson only had to progress through the quarters and semis and make the final to take his first WSL crown.

But never ever force Medina up against the ropes. Within the blink of an eye the young Brazilian, days away from his 25th birthday, had not only rolled out of the headlock but then hammered Coffin into the mat with a committed barrel and aerial for 9.43, followed by one of the best waves of the event and a solid 10. Medina progressed and suddenly Wilson not only needed the Brazilian to fall at the next heat but would need to repeat his 2014 Pipe Master crown.

Jordy Smith did his best to break the Brazilian’s flow but Medina manufactured the scores needed and as the clock ticked away the ocean went quiet. Smith sat patiently and with each second, tick tock, tick tock Wilson’s hopes died. The Australian paddled out for his heat with Slater who, we all know, wouldn’t give any quarter especially if there was another Pipe title on offer. On the 00:00 Wilson hugged Medina and the beach erupted with the green and gold. 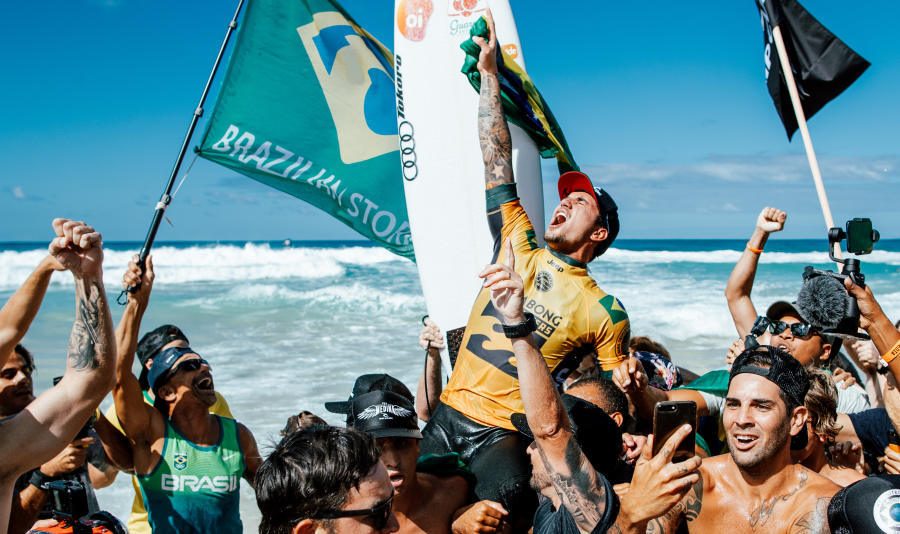 With Smith’s departure Jesse Mendes was the second Brazilian to take the triple crown (the HAWAIIAN PRO at Haleiwa Ali‘i Beach, VANS WORLD CUP OF SURFING at Sunset Beach and BILLABONG Pipe Masters at Ehukai Beach Park combined crown) in his rookie year.

Slater and Wilson surfed their heat with the entire beach looking in the opposite direction as Medina and the media circus headed up the beach to the scaffolding and his adoring crew.

There was still a Pipe title to answer. Slater looked happy and at home, but Wilson unshackled from a title run, answered King Kelly with a beautiful 8.77 and squeaked passed the seven times Pipe Master and into the final.

Medina had his second world title and was looking for his first Pipe victory. Wilson was looking for his second. He paddled in and with a late drop, barrel and a full rotation aerial nailed his colours to the mast. He followed it up with an insane double barrel, that should have won him a world title but it was to little too late. In 2014 Wilson snatched victory from Medina on the beach even as the Brazilians celebrated too early. He must have been praying for a repeat.

There was a lot of claiming from the pair even as the lead went back and forth until Medina punched through an impossible Backdoor barrel to take the 2018 Billabong Pipe Masters at Ehukai and the WSL World title.

No one wants short boards anymore
Never meet your heroes – One day in J Bay
It’s worth doing properly
Road to Nowhere - Indonesian government builds road across the reef at Nias.