by Matt Button on 20th December 2018 in Adventure, Bikes

Gus is in the process of colour matching his footage from the previous trip along Trans Canadian highway Route 1.

You guys are barely home?

Well with it seems that way at the moment.

So you’ve you’ve done Route 66 through the US, Route One in Canada and  just finished your journey from Albania to Istanbul? 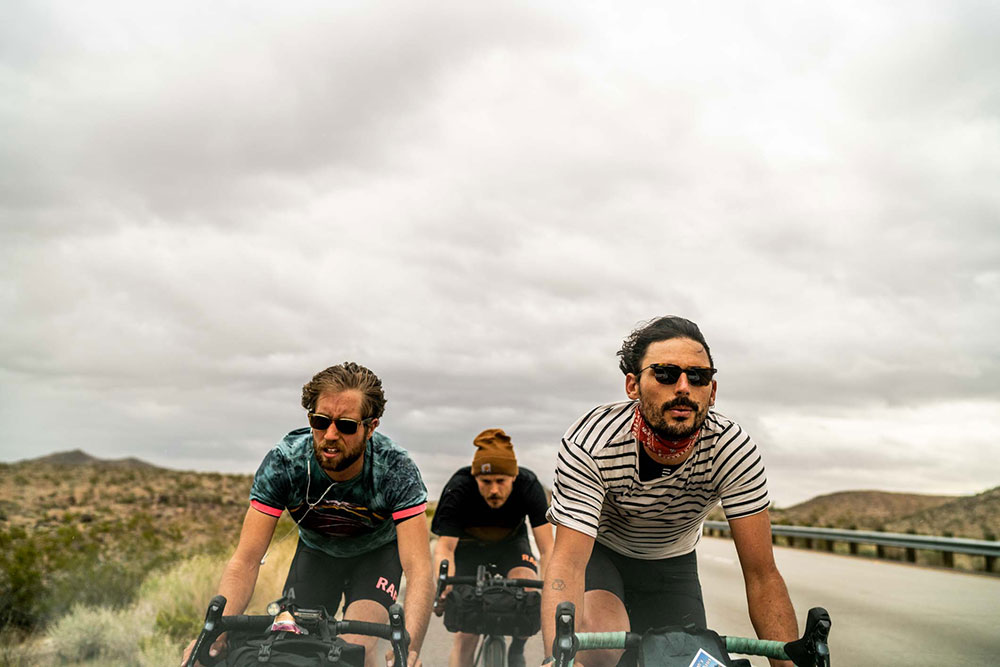 This is more than usual. We planned to do three this year but each of them got scrunched up a little bit towards the end of the year. We have another bunch that we need to start on in February next year so the last two got crammed into a three-month period. So it’s being a little bit hectic here. But we’ll survive.

I think you say something in the Outskirts:Route 66 piece your life being fairly chaotic and that you enjoy it like that. Is that still the case?

Things change day-to-day. If you asked me that question two weeks ago I would’ve been like “no I want a little bit more structure and calm”. But now I have weathered the storm it’s all good. You forget the hard part quite quickly, so I’m pretty happy.

Yeah, when I’m doing a task that I want to do, it tends to take over. All absorbing. Like when I was back racing bikes I tended to find myself a bit overwhelmed.

Having done a few long distance paddles often the naivety is the protection. If I knew what it was like I wouldn’t have the courage to start. Are you like that?

That’s exactly it. That’s how these projects started. Basically that. I was always held back by the thought of what happens if it goes wrong but until you jump in and do it you don’t really know what’s going to happen. And that, for me was the change. The bits that go wrong quite often are the best parts. I do find that I often plan to fail. I organise them to a point and then leaving plenty of room for the unknown.

Fuck this why my doing this? It’s not worth it!

You get the best personal growth when things don’t go to plan. When you’ve got no choice but to overcome it that’s when you get the deepest introspection and that’s where I learn from it. It allows you to look at yourself and look your life. The moment of reflection you don’t often get a normal life.

Often you’re 10 days into the trip, you’re tired, you’re lost somewhere, you’re hurting really bad and you think “fuck this why my doing this? It’s not worth it!”. I get that every three days and but then afterwards you think “wasn’t that the best?” 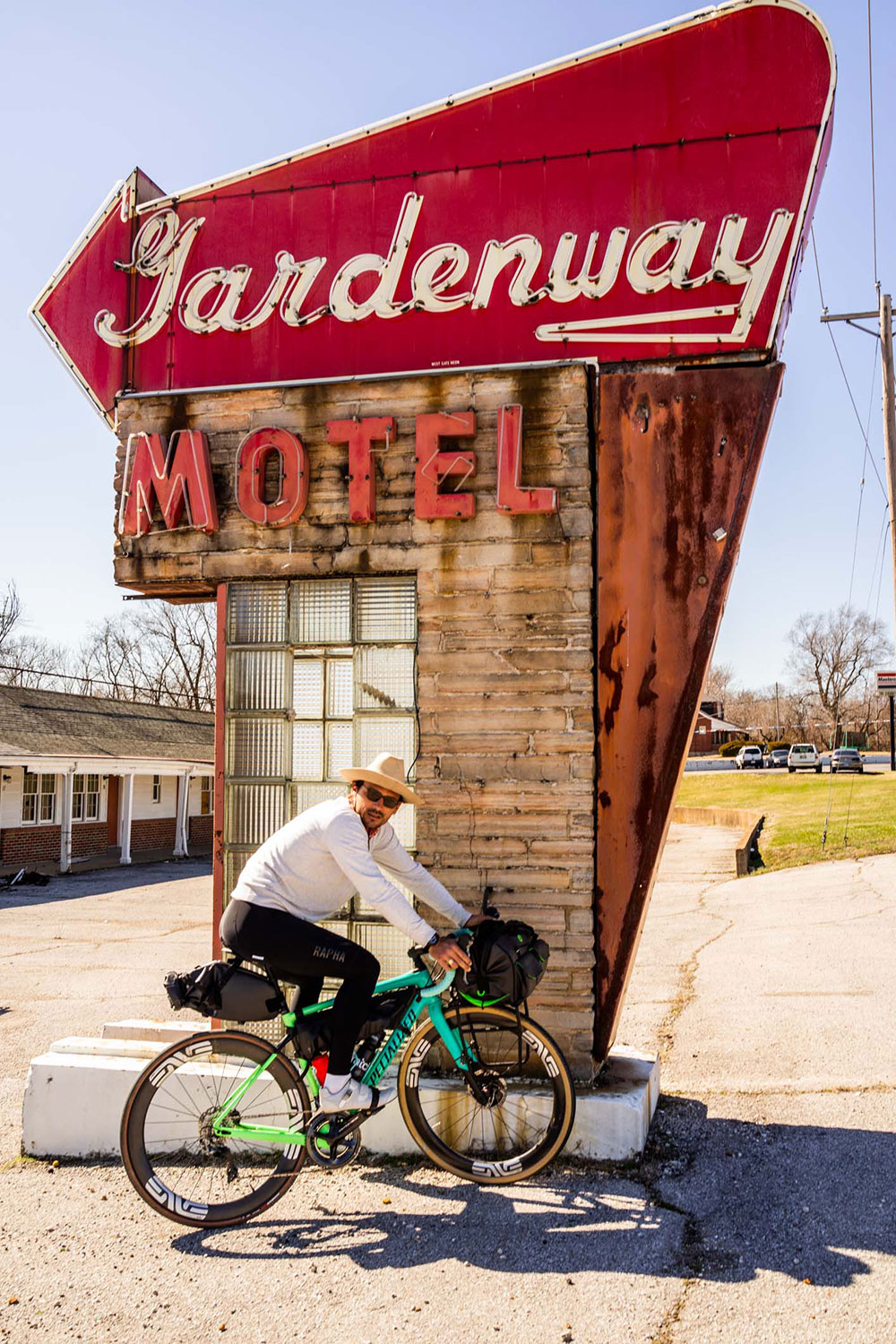 The physical exertion that you get from these journeys is something that filmmaking still struggles to get across, don’t you think?

It’s really difficult. We have this conversation all the time. How do you show how hard something is? That’s why we shot on the bikes and tried to get closer to that idea and feeling.

And that poor decision-making when exhausted and the emotional rollercoaster? Suddenly finding yourself in tears for no apparent reason or possessed with incredible euphoria…

Yeah, that’s the most interesting part for me about doing these trips. It’s that behind-the-scenes stuff, the inner dialogue and what happens at the end of the day when you set up your tents. It shows personality and the toll of the journey. There’s tons of films of people pushing themselves on beautiful bikes in beautiful places but it’s the peripheral stuff that’s more interesting. That’s what I’m trying to capture.

On the calories front we were drinking a lot of beer, eating a lot of shitty food -doughnuts, burgers.

Cyclists are obsessed with calorie intake? What was your intake?

We were trying to get away from that, after cycling for 20 years. It’s always about “calories, exertion, power output” and the technical aspects of bike riding, but these trips were born to get as far away from that as possible. So on the calories front we were drinking a lot of beer, eating a lot of shitty food -doughnuts, burgers.

At one point we realised that we had fucked up. We lost a few days at the beginning and later with the weather, so we had to ride 1000 miles in six days. We did two days back to back, 280 km in 10 hours back to back. There’s not much time to actually get food in.  The trips were ultimately about trying to catch a snapshot of the people and the places so the technical stuff wasn’t so important.  The focus is different therefore your mental state is different.

One last food question was it you or Justin [Diamond] that ate that massive steak? 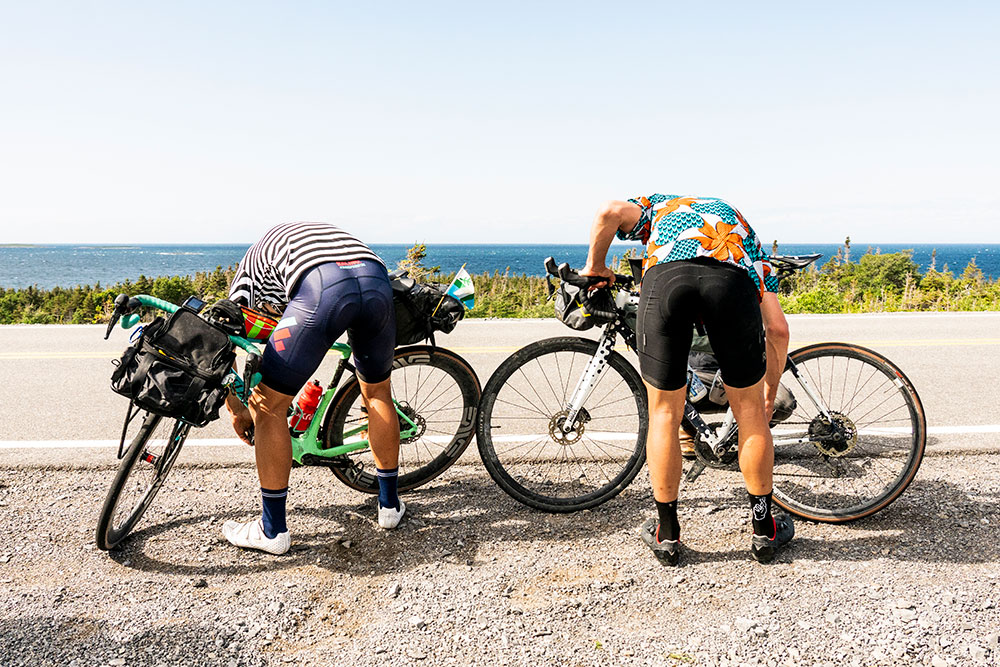 That’s one of the worst things that ever done. I think from the moral human perspective I have violated a bunch of personal commandments there. I read about this steak house that served giant steaks, and if you completed one they drove you home in a limousine. I thought we have to go to the dinner and just to watch, really.

We had had a 200 kilometres push that day so when we went we didn’t intend to do it. You’re sat up on this special table and become a spectacle. I thought “I have to do now. It’s so ridiculous, so American”. I didn’t think about it too much but when the steak came I thought there’s no way in hell that I can do this. Then the stubbornness kicked in and I did. After I projectile vomited about five minutes after completing it.

You basically went outside and purged?

Yeah. I felt like I was drunk. it made me feel very weird. 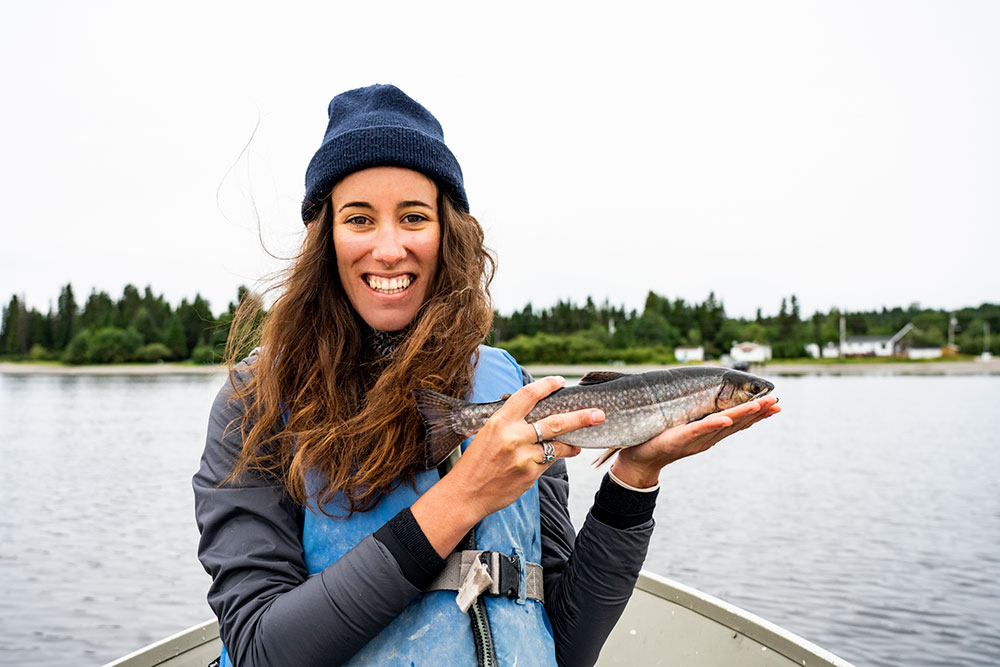 There was a lot of throwing up in the movie. Fifteen seconds in and Justin threw up because of his lactose intolerance.

(Laughs) There are a lot of bad decisions made on these journeys.

Justin is an interesting guy. He brings something to the group as a non-cyclist, rather a non-competitive cyclist. He got into bike riding only when he got to uni. He comes at the sport from a totally different history. He’s a civilian. But that’s nice. He brings a new enthusiasm and naivety to the whole trip that’s refreshing. The rest of us get jaded and it eventually becomes a little repetitive. You know what you need to do, you know how much it is going to take.

There was a lot of riding at night, there’s a lot of time lost. Towards the end it seems you spend more time on sand than tarmac.

Route 66 at the end just turns into the freeway so we were just trying to find all the roads around it. It seems that Google maps creates of road anywhere that a mobile phone has been taken so if the farmer has been crossing his land regularly with his phone Google marks it is a track or road when in fact it’s often not. Google thinks it must be a road, so we thought there must be one there.

Often we would just be walking in fields, everyone tired, exhausted  and yelling at each other in some random field, but you just keep going but usually find a way out. Those are the best bits. I’ve done lots of trips with my brother and we always know we’re going to get through. For the Outskirts I’ve brought in other people which adds a new dynamic. I feel responsible for these people but nobody backs down, everyone was cool, super cool and everyone bought something unique to the trip. 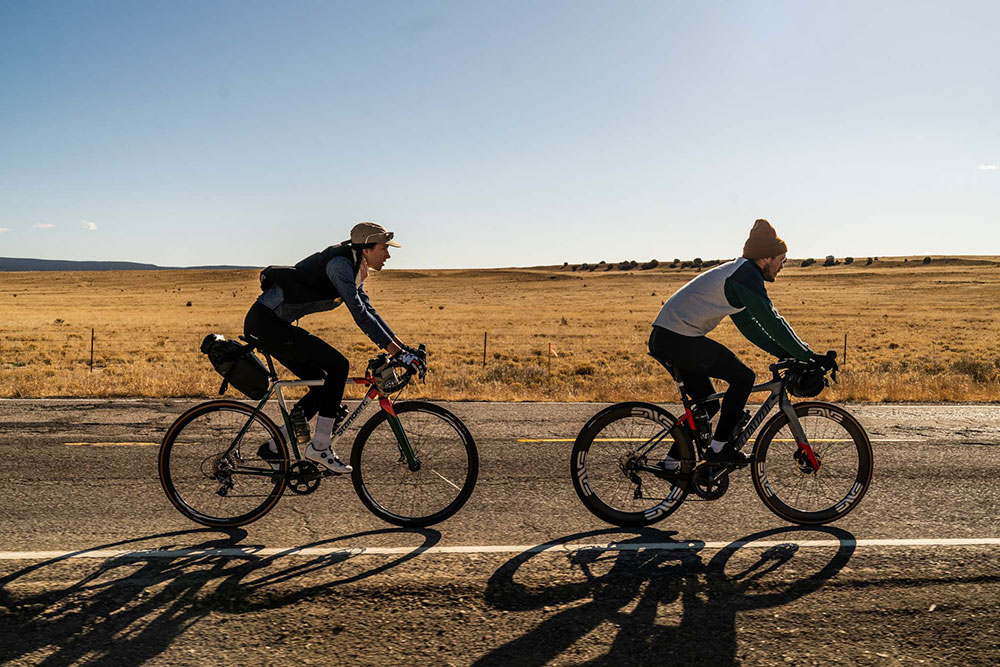 Okay so you’ve done some stuff in the US and in Canada, how did Europe compare? From Albania to Istanbul there’s multiple different languages if nothing else. How does that compare?

I’ve never been to the Balkans before never been to Turkey before. It’s totally wild and a different world. And although it’s still considered Europe we thought we would be able to easily relate. But from the moment we arrived it was obvious that it wasn’t what we were used to. Everything felt a bit more intimidating but the people are just amazing, the place is complex, open and historic. There were a lot of wars in the region and there’s a lot of tension over borders and cultures. Each place is very wary of the next group. Croatians worried about the Albanians, the Albanians worried about the Montenegrins and so on.

That sort of thing happened everywhere. I loved Albania and the Albanian Alps, one of the most beautiful places I’ve ever been. Istanbul is mind blowing, I love Turkey to. I can’t wait to go back.

The Fixer that we got from Kosovo smoked five or six cigarettes a day when we met him by the end he was chain-smoking two packs a day.

There is an ex-Spanish professional cyclist called Juan Antonio Flecha. He came out to cycle with us. On the first day we organised a weird B&B, in the middle of nowhere of Bulgaria, where one of the options was for the host to cook lamb. [Sami laughs in the background]. Turning up there was the lamb, freshly cooked. it tasted amazing but it made Juan violently sick. He got major food poisoning just as he turned! not much of a welcome to the show. 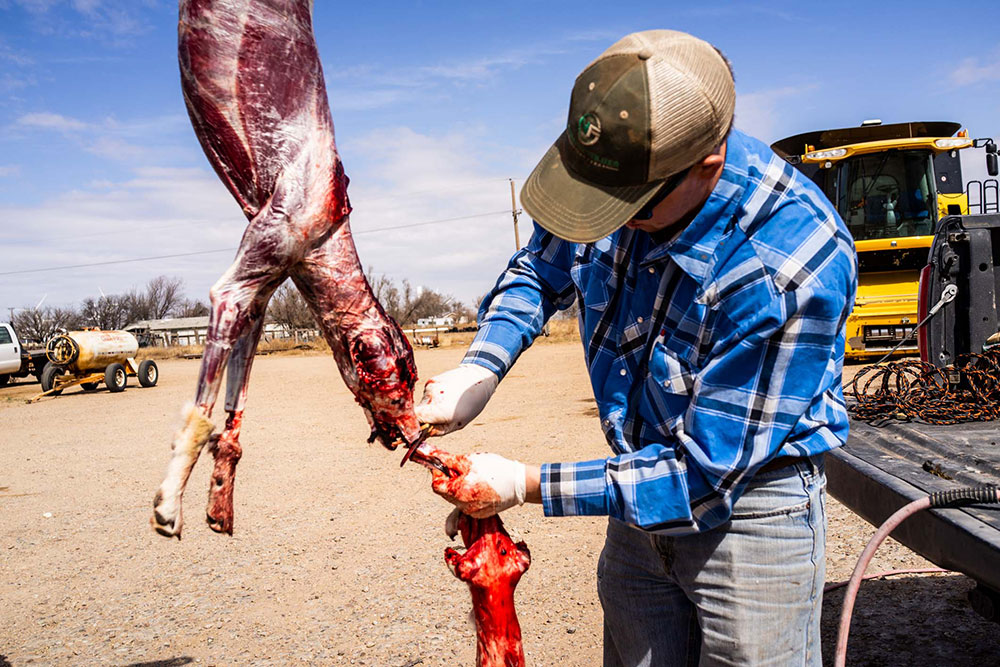 I’m starting to think this is as close as I want to get to you. Because you seem to be the lowest common denominator here. [Sami laughs in the background] Everyone you travel with ends up throwing up within the first day…

I’m also beginning to realise that. At the time it seemed great and so funny, but then I thought “poor motherfucker”. There was a lot of physical comedy and a comedy of errors. Even in the States people were surprised and confused by what we were doing so you can imagine what it was like in Albania and Bulgaria.

The Fixer that we got from Kosovo smoked five or six cigarettes a day when we met him by the end he was chain-smoking two packs a day. We had to buy him cigarettes because he was so stressed by what we were doing. We bought them to stop him from leaving us or having a mental breakdown! (Laughs)

What have you guys got planned for the future except editing and colour matching?

We’re doing a new six part series next year. Nepal, a bunch of places in Europe, China and Japan, as well as the US. It’ll be similar to what we did this year but incorporating more racing as well. An alternative take on bike racing. And hopefully another feature length documentary along the lines of what we done this year.

Thanks you’ve been super generous with your time. Good luck and keep us up to date with all your crazy adventures. 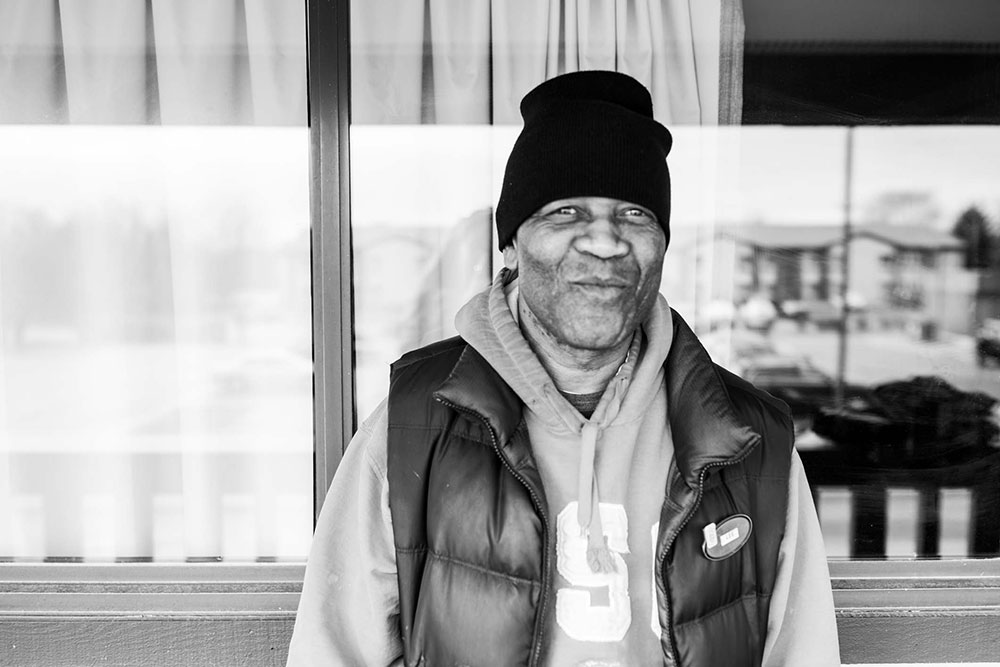 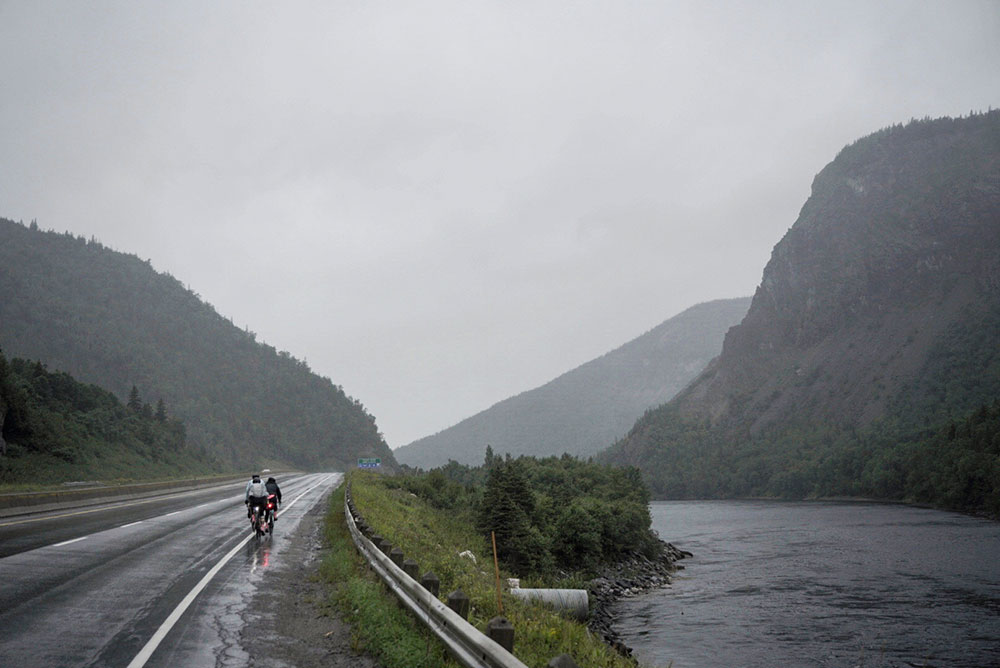 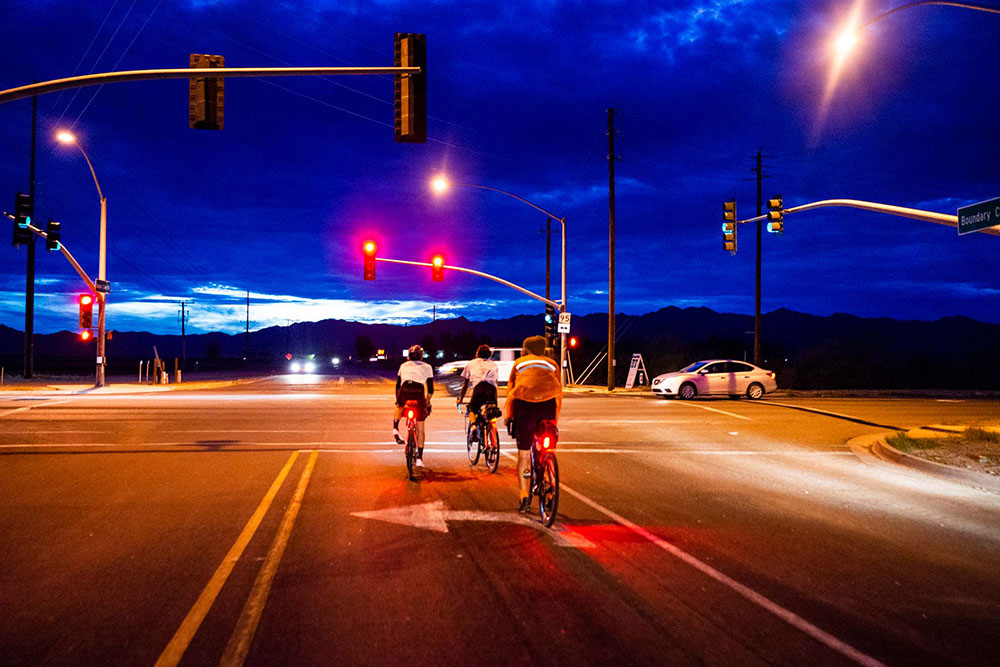