The borderline of possible: Are athletes pushing themselves too far?

Is social media and brand support facilitating the breaking of boundaries or setting a dangerous precedence for pushing too hard and too fast, with elite outdoor athletes paying the ultimate cost – their lives?

Alex Honnold turns to his long-time friend and climbing partner Jimmy Chin, and says in a typically nonchalant and Honnold-ian manner,“I care about doing it a lot more than I care about it being filmed”.

‘Doing it’, in this instance, refers to free-soloing the Freerider route on El Capitan, one of the most awe-inspiring and exposed big wall climbing routes in the world. And in all honesty, most people do genuinely believe him. 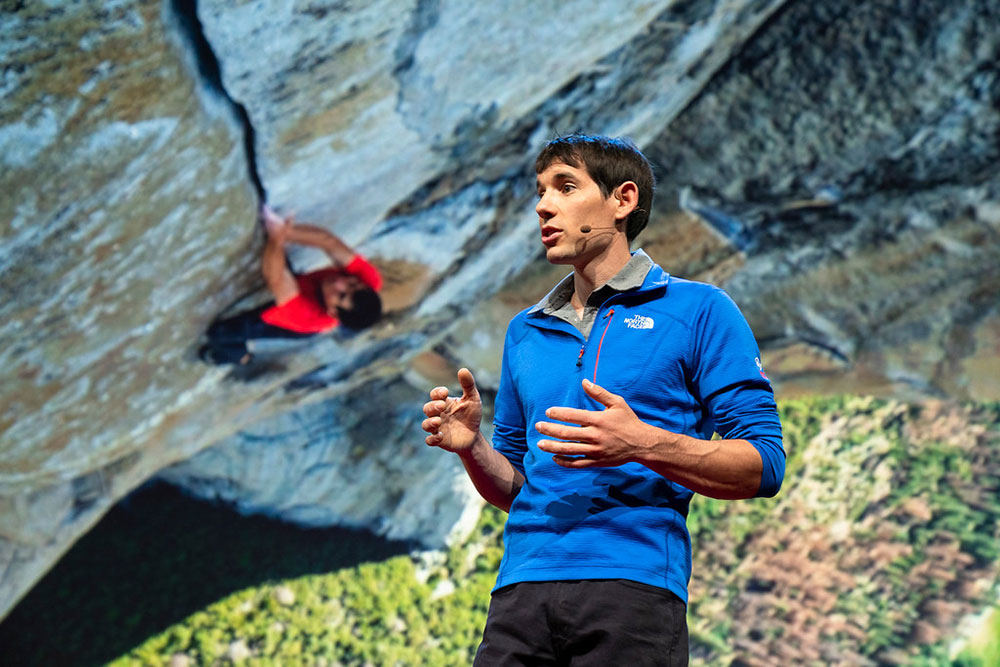 Honnold seems to be anything but a limelight-seeking, fame-pursuing daredevil, risking his life in exchange for a bit of Hollywood exposure.

The inescapable question here however, is not whether or not people like Alex Honnold would do the same remarkable things without the cameras rolling, but could they?

Undoubtedly they would still have the motivation and drive to succeed, but without the media coverage and all the support (both financial and physical) that comes with it, could modern day adventurers still find the means to commit the best part of their life towards the pursuit of athletic achievement?

It is no secret that Chin was hesitant to shoot free-solo climbing due to the inherent danger associated with it, and admits the presence of a film crew, along with the financial investment in the film’s production, could put undue pressure on athletes to take risks.

As fellow professional climber Tommy Caldwell bluntly states, “everybody who has made free-soloing a big part of their life is dead now”. 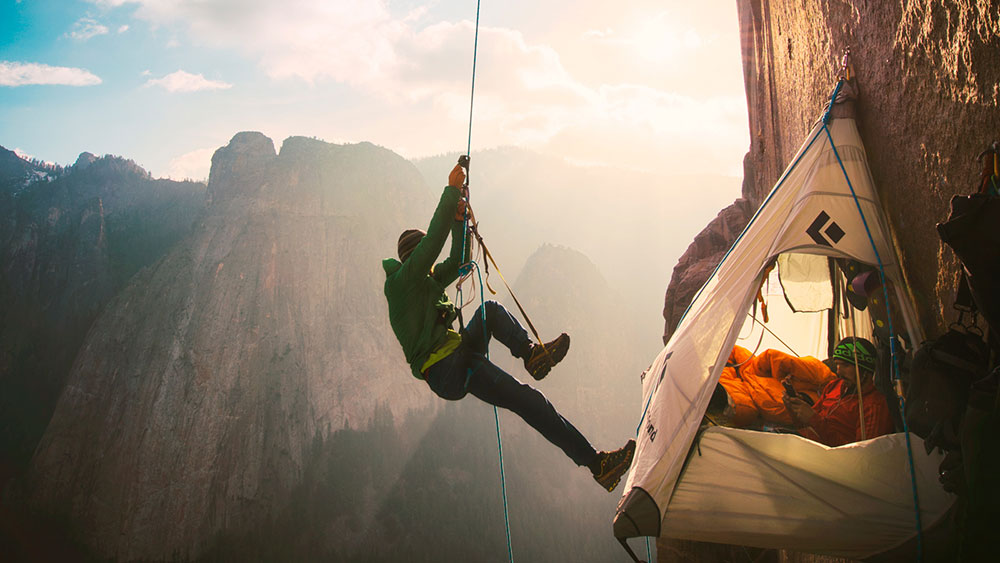 The image of the vagabond, dirtbag climber has become an emblem of the past as the 21st century has given way to a new breed of professionals. The likes of Honnold, Caldwell and young guns such as Adam Ondra and Shauna Coxsey, exemplify how the new age of professionals carve out sustainable careers and even earn a decent salary.

At one point during Free Solo, Honnold likens his earnings to that of a “moderately successful dentist” which is ironic as only 20 years ago most “professional” climbers couldn’t afford to go to the dentist.

And this trend is not just apparent in the climbing world, it’s happening throughout the outdoor industry. Skiers, mountain bikers, surfers, base jumpers (the list of obscure and dangerous sports goes on), are all managing to turn their hobbies into ‘professions’ without having to rely solely on prize money earnt from competitions.

And of course, this is all thanks to our good friend the Internet. Without Instagram, YouTube, Facebook, and all the other platforms at their disposal to release content and self-promote, it would be infinitely more difficult for outdoor athletes to have a decent and reliable income. This generation of adventurers have grown up in a world where they can shoot, edit and upload content pretty much anywhere in the world, meaning they can dedicate more time to pushing the limits of their sport.

Take for example Ross Edgley’s groundbreaking (pun intended) swim around the mainland of Great Britain; a 157 day, 2833km, 610 banana feat of physical and mental endurance. Without the heavy backing of Red Bull, who released weekly vlogs on YouTube and generally saturated social media with updates on his progress, it would have been next to impossible for Edgley to finance and organise such a task. 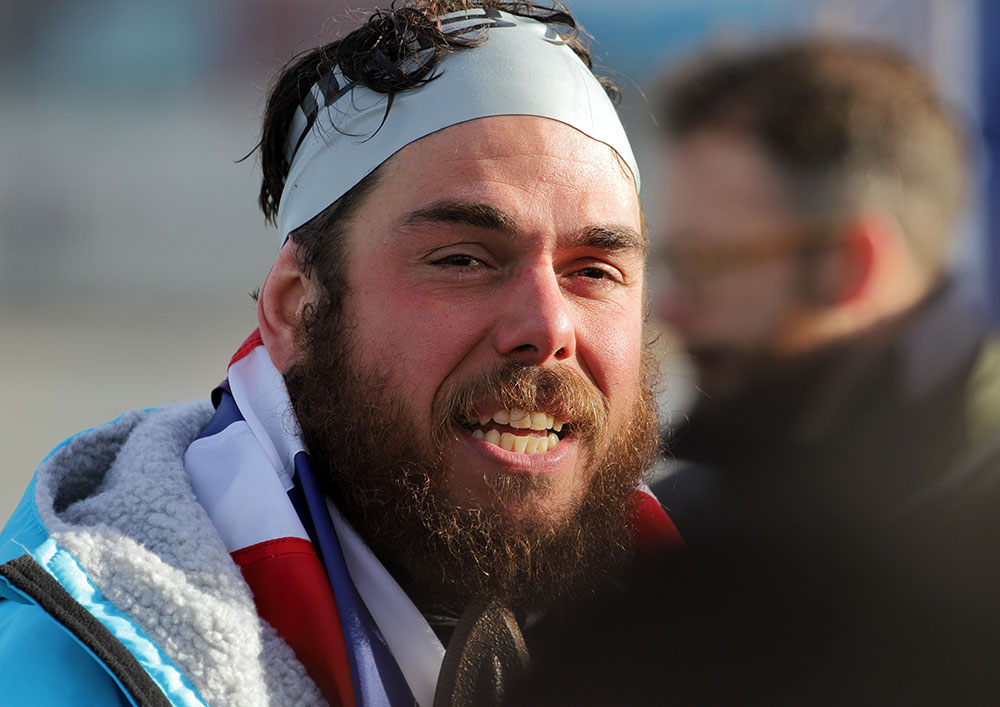 This is by no means to downplay what he achieved; it is undoubtedly one of the most impressive athletic performances of the last century, but it goes without saying that such a massive undertaking requires a vast network of resources that only an action sports behemoth such as Red Bull can bring to the table.

What’s more, it testifies to the power and value of product placement, as Edgley pointedly fuelled up with a can of the energy drink before each of his two daily swims.

Modern day outdoor companies and adventure athletes can be seen to have a largely symbiotic relationship; companies like Red Bull and GoPro need athletes to produce content that users will engage with to promote their brand image, and athletes need the sponsors so that they can continue to do what they love.

This click-driven relationship has given way to what we could conservatively state to be the golden age of extreme sporting achievements, as athletes and their sponsors clamour for our attention by trying to create the most outrageous and eye-catching content around.

The ever-expanding reach and influence of the internet means it is worth the while of marketing teams to pour money into each project, so whether its Edgley swimming around Great Britain, Andrzej Bargiel pulling off the first descent of K2 on skis, or even Emily Scott summiting all 282 of Scotland’s Munro’s in one continuous, human-powered effort, if people will click on it, brands believe it is worth investing in. 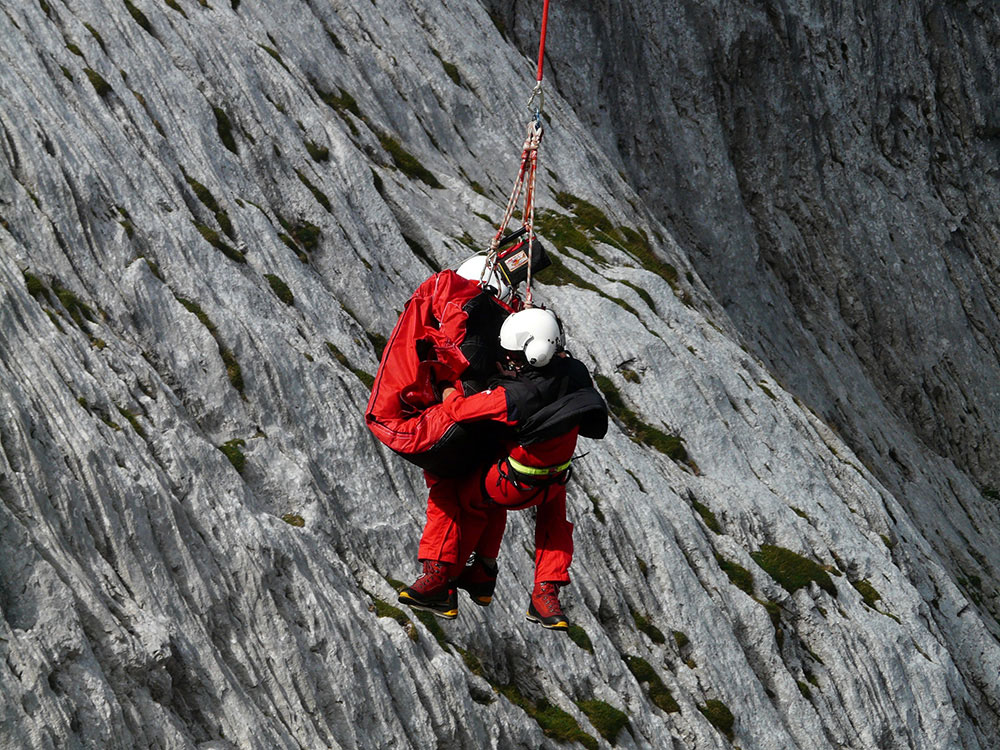 The problem here, however, is that as skiers, climbers, country-circumswimming-strongmen and all other manner of athletes are now spending an increasing amount of time pushing the proverbial (and also physical) limits of their sports, they are also increasing the amount of time that they are in dangerous, life-threatening situations.

Take for example, elite-level freeride skiers, who in the not-so-distant past would have been working odd jobs in the local ski town so that in their free time they could ski powder and film the occasional edit.

Now that they are able to earn a more consistent income through the constant advertising and promoting they do on social media, it means they can devote more time to skiing. Inevitably, this means they will be spending more time in the backcountry, more time in avalanche terrain, and more time in life-threatening situations.

Obviously a by-product of this increased time skiing will be a better understanding and knowledge of avalanche conditions and higher skill levels, but statistically their exposure to hazards that could potentially kill or injure them is going to also increase.

Indeed there is no shortage of iconic professional skiers that have tragically lost their life whilst pursuing the sport that they love; in 2009 Shane McConkey died during a ski-BASE jump (a sport that he himself had invented) in Italy, in 2014 Armada prodigy JP Auclair was killed by an avalanche in Chile whilst filming for a webisode series, and then in 2016 Matilda Rapaport also died after getting caught in a Chilean avalanche during a commercial film shoot, and most recently in April 2019 Dave Treadway lost his life after falling into a Crevasse whilst skiing in British Columbia. 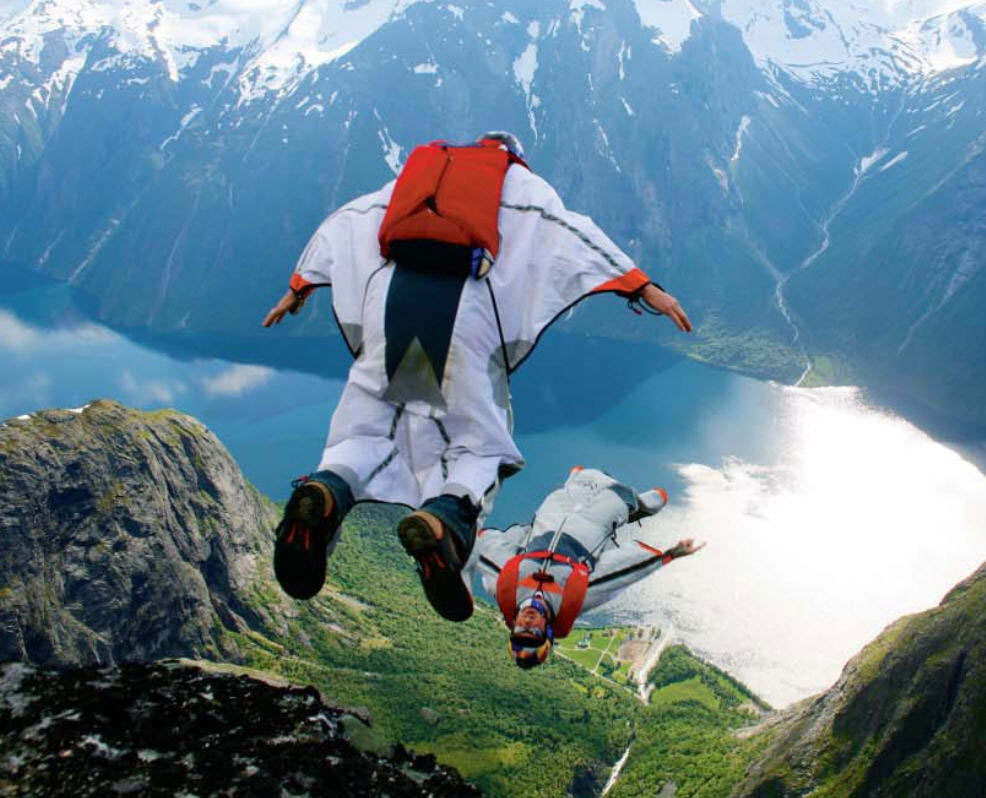 Mountains have no regard for experience and skill when it comes to those trying to enjoy and conquer them; indeed, the alpine community is still reeling from the loss of three of its most revered mountaineers on 16 April 2019. David Lama, Hanjӧrg Auer and Jess Roskelley died in an avalanche whilst descending Howse Peak in Banff National Park (Canada), after successfully summiting it hours before.

Lama was a household name in the climbing world, having been a child sport climbing prodigy he then proceeded to focus his attention on bigger outdoor objectives, putting up several first ascents in tough alpine environments, his most notable being the first free ascent of the Compressor Route on Cerro Torre (Patagonia) in 2012, followed by the first free ascent of Lunag Ri (Nepal) in 2018, which he completed solo.

The more time that is spent pushing the limits, the more likely we are to feel a push back

Hansjӧrg Auer had also dedicated much of his career to free-soloing, his most famous rope-less ascent being of the Fish Route in the Italian Dolomites. The third member of the team, US born Jess Roskelley, was an up-and-coming mountaineer who at one point held the title for the youngest American summit of Everest at the age of just 20.

Evidently not short of accolades and alpine experience, the death of these three adventurers, who were all part of The North Face’s climbing team, reminds us of the inherently indiscriminate nature of the mountains. It therefore seems pertinent to remember the statistical perspective; the more time that is spent pushing the limits, the more likely we are to feel a push back.

What therefore must be said of the sponsors? Of the apparel brands and sports nutrition companies that help to fund the lifestyles and exploits of these elite athletes? It would be a long stretch to say that they are in any way directly responsible for any injury (or worse), nonetheless it should not be overlooked that without the sponsorship, the free gear and the pool of resources that they offer, many of the ideas that outdoor athletes have would remain just that; – ideas.

This is not to say that it is exclusively sponsored athletes that lose their lives; according to the National Ski Areas Association, between 2002-2012 an average of 41.5 people per year died whilst skiing or snowboarding in the US. More than 300 people have died on mount Everest, many of them being amateur climbers who pay to join a commercial expedition, and with the vast majority of their bodies having never been recovered from the mountain. 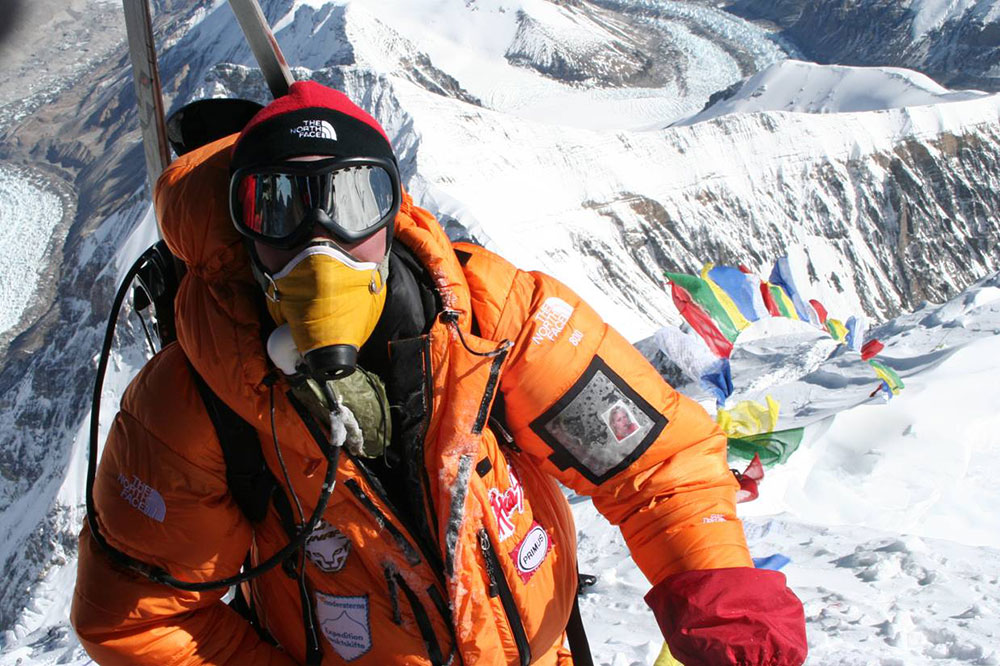 Olof Sundstrom tops out on Everest summit. The 2019 season has proved as controversial as ever with bottlenecks causing huge delays and serious injury. Image Olof Sundstrom

Adventure sports obviously claim the lives of amateurs more frequently than professionals, with the former being less widely publicised than the latter. The bigger and bolder the objective, however, the greater the inherent risk to the participant, and it is undeniable that this genre of adventure remains exclusive, for the most part, to the sponsored pros.

So now that we have established that this symbiotic relationship between sponsor and spons-ee is potentially dangerous, what, if anything, should we be doing about it? Is it down to the sponsors to veto any activity that they deem too risky?

Tons more people have died, and Alex is kind of the most likely to die

Should they be limiting the number of expeditions that climbers and mountaineers are allowed funding for in order to reduce their overall exposure to dangerous situations? Clearly not; these measures are as unlikely as they are impractical. The last thing we want to be seen doing is quashing the aspirations and ambitions of those who are willing to commit their life to exploring the potential of human achievement.

Accepting our futility in this battle between risk and reward may appear a depressing sentiment; speaking of Alex Honnold in the build up to his free-solo of El Capitan, Tommy Caldwell manages to rationalise his support, saying “tons more people have died, and Alex is kind of the most likely to die, but I know he is going to do it so I’d like to be there to help him prepare as well as he can”.

The caveat of this concession however, is that as our attention spans decrease, as it becomes harder to impress us and requires ever more to make us click on the link, the trend we have seen in the last few decades will only continue.

Records will be broken, milestones set, bigger and bolder ascents achieved, who knows perhaps someone will swim around Australia fuelled by a daily diet of 14 Red Bulls. In the background, however, there will always be those who push the limit too far, who in the search of making the next big step in the sport and trying to stand out from the competition, will sadly pay the ultimate price.

Pure: David Lama’s First Ascent of Lunag Ri
A Line Between the Tides.
A real life superhero reveals his soul force
House of Beyond: What's it all about?
Share this...