James is having a rest this week. ‘I love having the courses but it’s a little intense at the moment with a newborn and a rebuild’.

Behind the blue door of number 6 Mount Pleasant Eco Park a world of fresh cut wood and deeply aromatic oils greets you along with a smile and a bro hug from Mr. Otter. And of course Buddy the dog. 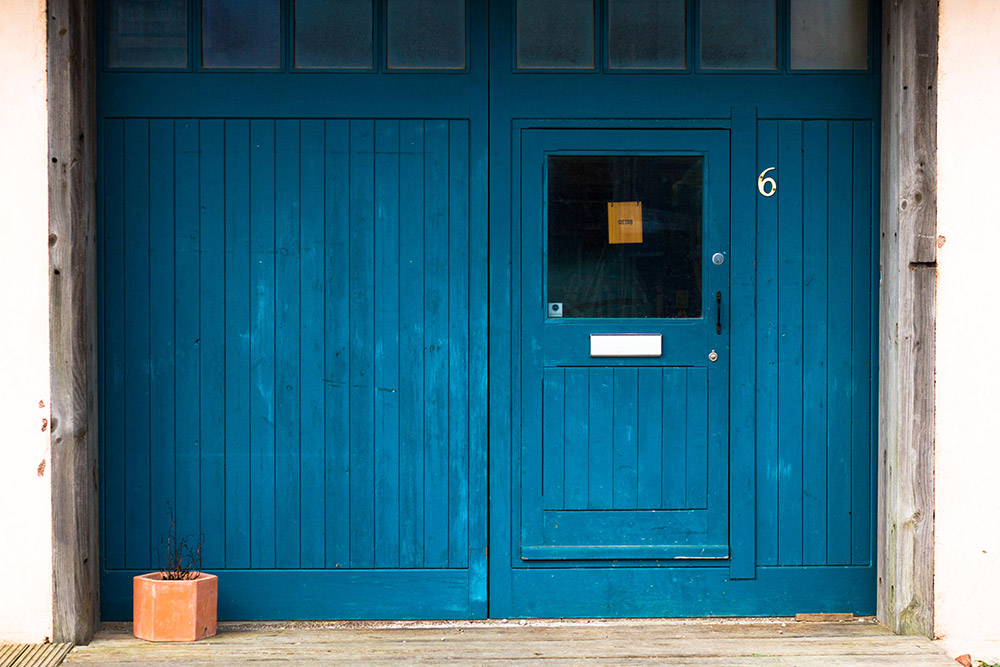 The surfboard shapers traditional environment is one of harsh chemicals and foam dust. Even those of impeccable cleanliness work surround by heavy carcinogens and volatiles. It is not a healthy place to labour by any standards and often looks like Pablo Escobar has been in with a little free product. But Unit 6 is filled with nothing but the sweetness of sawdust and wood stain, and it always soothes the soul.

He’s neat, organized and quick to laugh, and I’m instantly envious of his skill

Part of the Zen-like ambience is James Otter himself. The award-winning craftsman exudes tranquilly. He’s neat, organized and quick to laugh, and I’m instantly envious of his skill, stillness and his workspace.

Even his brushes with international fame hasn’t dented the calm. Last year it was Prince Charles, Kate Humble even the newly married Prince Harry and Megan. The oddest one -‘Yeah I just received an email out of the blue asking if the Discovery Channel could come and film the boards being made. In fact the producer actually emailed Buddy. He was kinda quirky like that…’ we look at Buddy chasing rabbits in his sleep. ‘… and asked him to pass it on to me. Honest’. 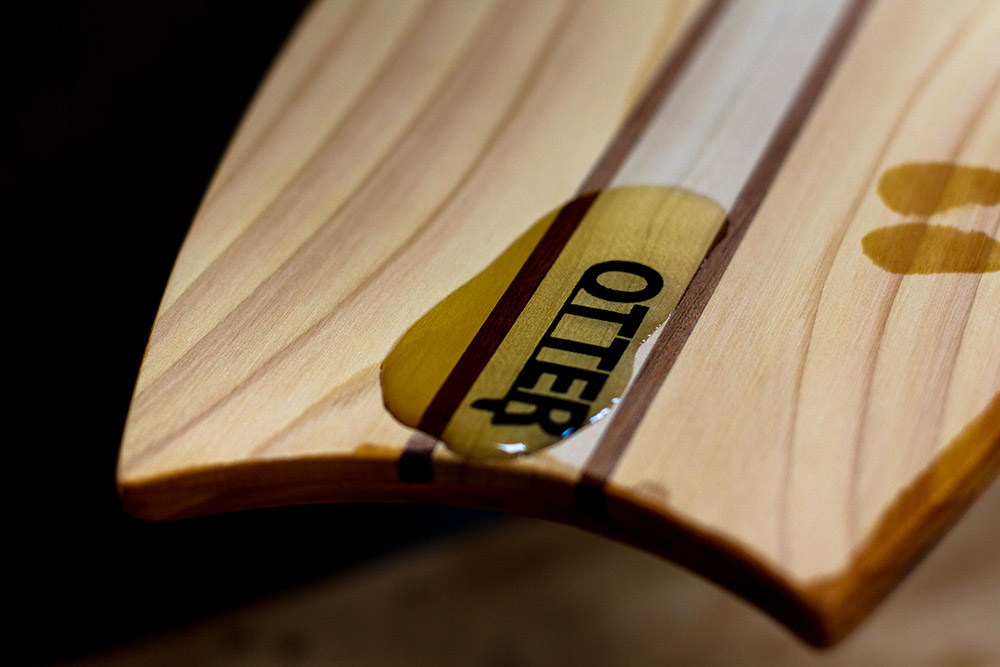 ‘We’re taking the hand planning out to festivals again. And building our SUP range.” Otter surfboards of the full gamut of surf craft, from the sublime to the ridiculous and back again.

James is an artisan. The walls are hung with a beautiful assortment of carpentry planes and files. Templates and hand tools fill the walls along with landscapes and sunsets of the Badlands coast. Regiments of clamps standing to attention is about as formal as the place gets.

I admire his collection of Japanese tools – Nokogiri saws for narrower cuts, some double-edged Ryoba, Kanna planes, Nomi chisels. As James lightly oils another hand plane and talks of visits  from Countryfile and Escape To The Country his quietness and attention to detail invokes the Japanese Daiku carpenters whose gentle perfection is as focused on a sublime teahouse as it is on soaring temple.

Otter started out in furniture design at Plymouth University but his love of surfing brought him back to the sea. Influenced by the likes of Skip Fry, Tom Blake and George Greenough, each of whom found their own path and eschewed popular culture, James turned his back on the environment disaster that is the modern surf industry in favour of western red cedar and English poplar.

Each board he crafts is as unique as the tree it came from. How the grain falls and boils and flows is as individual as every swell and every season at passes along the Cornish coast. 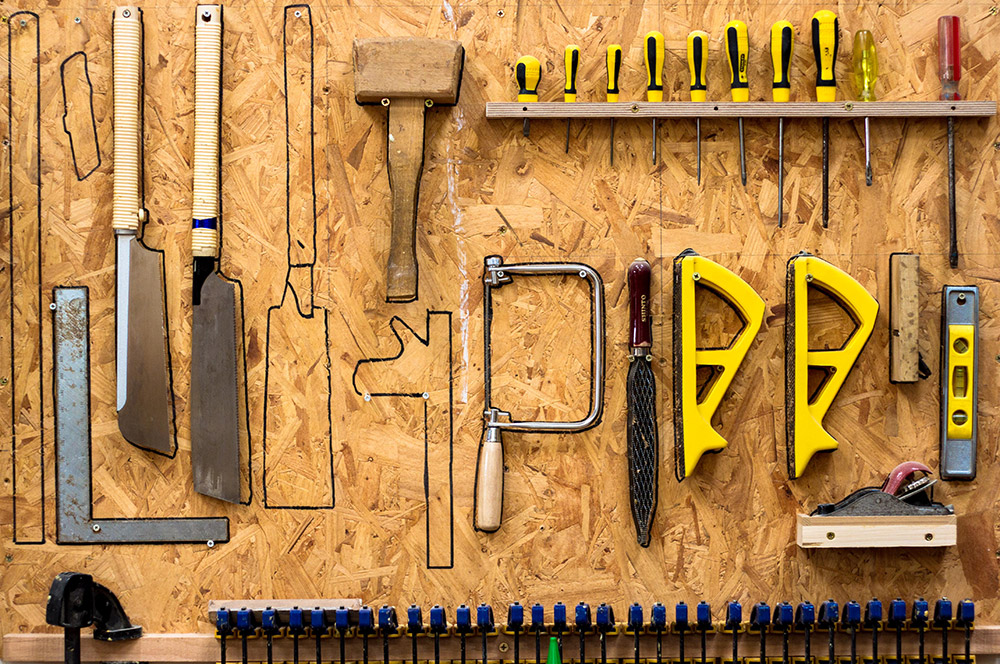 We surfers are smitten with the aesthetics of our boards. The other paraphernalia of surfing doesn’t have that same need to be held. There’s something indefinable about our vehicles that they need to be brushed and touched, much to the chagrin of shop owners.

For someone whose carpentry skills run to flat pack furniture I can think of nothing more pleasing than shaping such beautiful, unique objects. I’m not alone in this and James’ board building courses are increasing in popularity year after year. I ask if anyone actually surfs them. To me they are rarefied masterpieces.

‘Oh, yes. Most think that they’ll just put it on the wall but by the time it’s finished they can’t wait to get the wax on.’

“The boards themselves are not as corky as foam boards but the extra heaviness translates into down-the-line drive, and consequently glide”. There’s rarely any need to pump Otter boards. And why would you. They lend themselves to stillness and grace not chop-hopping anarchy. 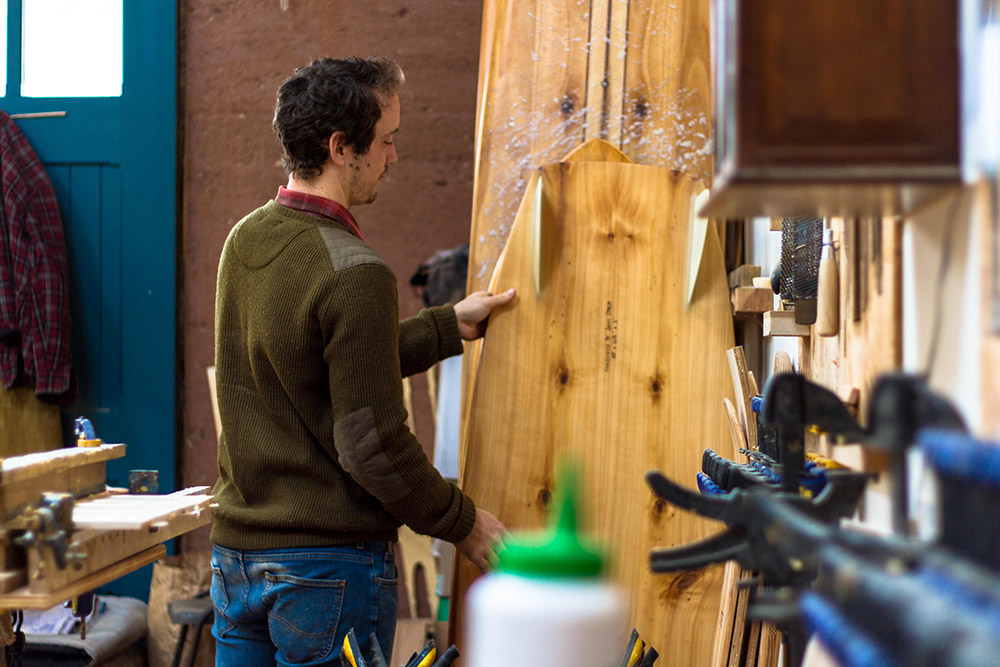 ‘These boards are not disposable like short boards seem to be.’ James carefully places the stained hand plane on the surface and asks if I want another cuppa. ‘They often become a new member of the family’ James laughs. He checks the clamps and vices coercion the cedar into the sort of contours decades of winter storms are required to achieve.

If you’d like to make one of these beautiful pieces of personal history then contact Buddy (or James, of course.) at Otter Surfboards.

Upcoming workshop dates are below: 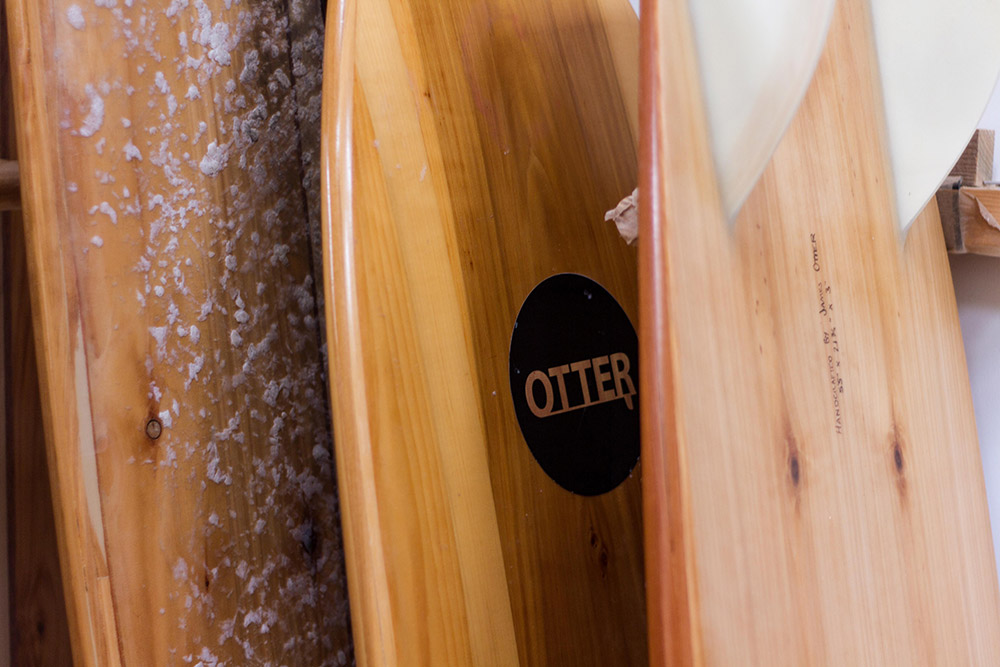 The slabs of Ericeira
No one wants short boards anymore
The delight in life: An interview with John Callahan
Books every adventurer should read