From curtains to kings: The story of Alder Surf

That’s the only word to describe Devon in early summer. The only way, in fact, to describe the Westlake home. The founders and owners of Alder Sportswear live and work on their old farm nestled under glorious English foliage. There can be few more beautiful places in this world or the next.

‘My Gran was born here. My dad was born here, too. In fact we were all born in the same room. My sisters live over there and there. I’m the only wanderer in the family, I live three miles down the road.’ John Westlake points across the valley toward the trees and the village beyond.

The Westlakes started out as dairy farmers but as founder Bob Westlake, John’s father, took Alder into the surf industry the family farm became the offices and warehouses of Alder Sportswear. 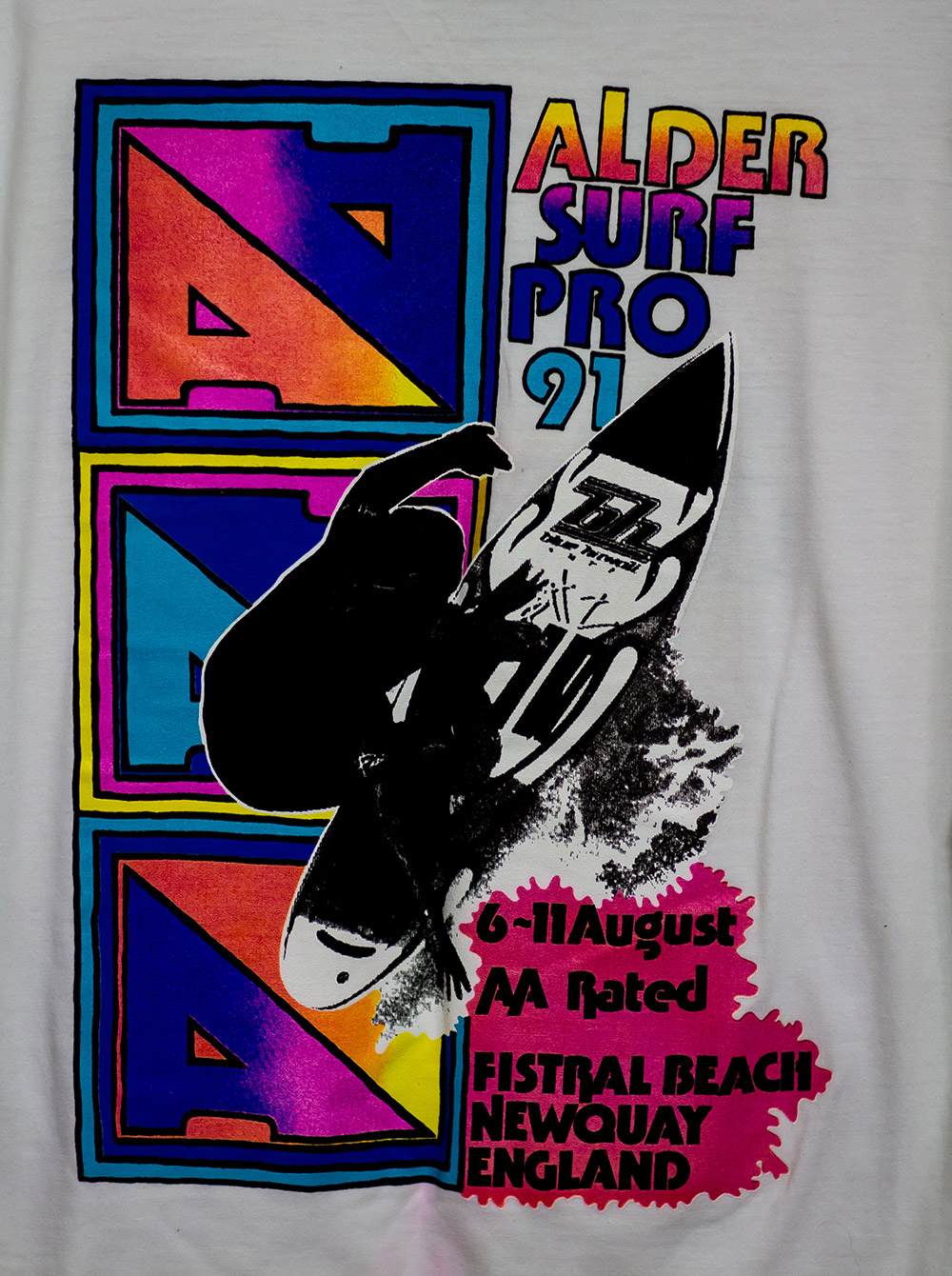 We’re in the old milking shed, now the meeting room and show room. Across the ceiling is slung Bob’s old Bilbo board and where heifers were routinely tethered rows of Alder wetsuits and the plethora of licensed material now stand to attention.

If the Westlakes are good at making wetsuits they’re even better at developing links with other companies. Over the years Alder have been involved with Gotcha, the mysterious vanishing Clarke foam and BZ boogie boards.

But Airwalk’s triumph ultimately meant trouble for Alder who, in the avalanche of success, struggled to maintain control of its own brand

They turned down an embryonic Quiksilver but it was Airwalk shoes that had arguably the biggest impact on the family business. Before Vans reasserted itself as the go-to-skate-shoe, Airwalk was king, particularly in the UK.

But Airwalk’s triumph ultimately meant trouble for Alder who, in the avalanche of success, struggled to maintain control of its own brand.

Eventually the family run business had to step back and make a conscious decision to return to the values that it was founded on. ‘We wanted better connections to our customers again. Return to being a local business. Yes, we are international, but we’ve always had a family business vibe. 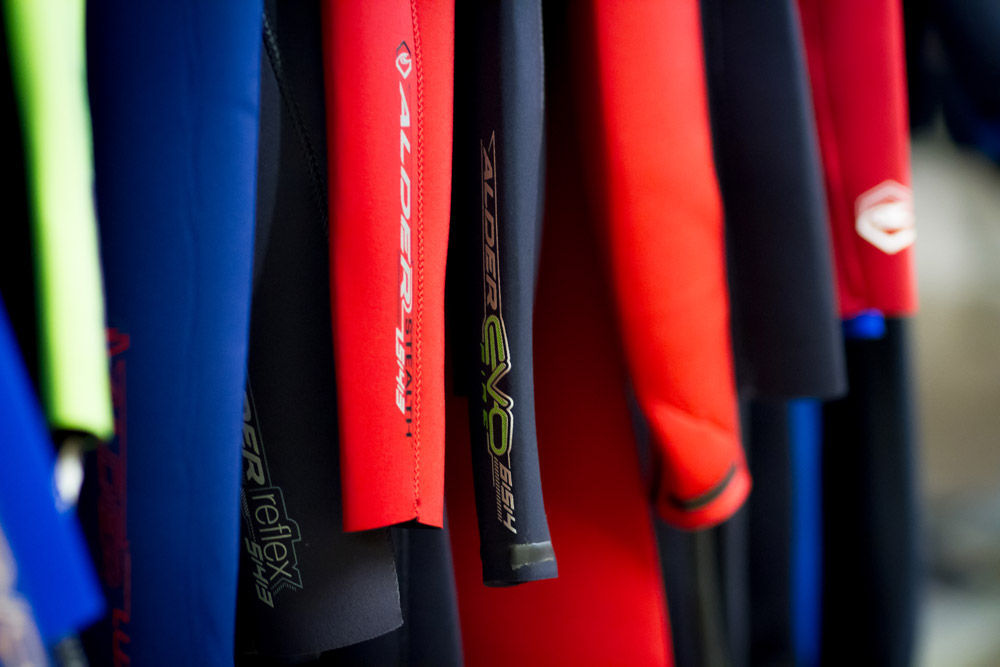 ‘Everyone who works for us is family.’ And although most of the products Alder make or distribute are made in China all repairs are done in humble ol’ Devon, usually by John himself. ‘It’s important I see what faults are coming back to me over and over again. If something keeps coming up then we can correct it in the design.’

It’s important to the Westlakes to be hands on. That’s how they started after all. The valley is within driving distance the coast. Saunton is a favourite, but Polzeath was ground zero for Alder. Bob’s passion for the sea lead him to stitch together a wetsuit top to stave off the Atlantic chill, but it was his seamstress wife Annie who fashioned the first Alder boardshorts out of curtain material.

In the absence of the global monster of today’s surf industry Bob and Annie were asked, pestered and begged for pairs of boardies. Soon Anne’s Cottage, back when it was more garage than surf shop, was their first customer. The Westlakes have barely had time to look back since.

Over the decades Alder shored up British and European professional surfing, teaming up with Gul to support the sport across Europe through their Euro Grand Prix de Surf, links that even today hold strong. In 1991 it sponsored the ASP (the forerunner to today’s WSL) event at Fistral, where a wee grom by the name of Kelly Slater didn’t make it out of the third round but his hero Tom Curren lifted the trophy.

Hung on the walls and racks are more signed rash vests and t-shirts than I’ve ever seen. Tom Curren seems to have been most prolific, in fact it looks like it was impossible to stop him signing everything in sight.

Downstairs in the reception, framed and pristine, are Annie’s first shorts. They stand testament to longevity and a world before rampant consumerism. Alder has, in turn, embraced and been stung by the vagaries of the globalisation of surf culture, but today John has a firm but gentle hand on the tiller. I like John, not only because he’s made me cheese on toast for lunch, but there’s a gentle calming aura to the man.

In an industry of egos and raconteurs he’s serene and laid back. He was comparatively late to the surfing tribe. When his dad took him in at the ripe old age of 14 John nearly died. Not from a hammering set or the unforgiving solidity of fibreglass but rather from embarrassment. 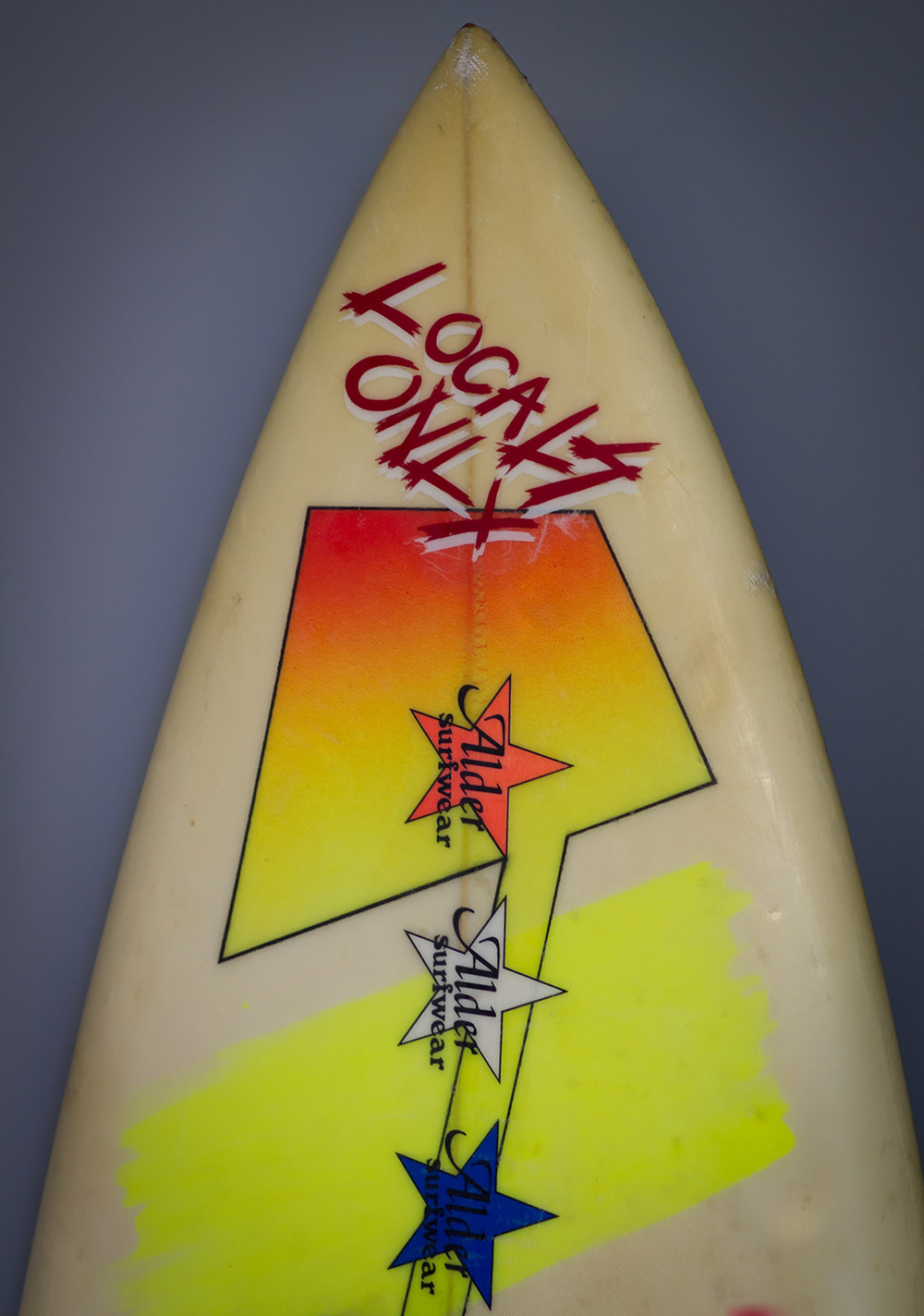 ‘Dad made me where this lifejacket, huge thing, disproportionate to what was needed’ he chuckled. We agreed that it was better to have grown up before everything was documented on insta-google-tweet-face.

Alder is celebrating its 50-year anniversary. The company and surfing have come along way from those curtain boardies. Wetsuits are quick drying and self-heating, but the needs of surfing are driving research and development.

We chat about Mark Boyd product testing in the howling ,cold perfection of Thurso and Conor Maguire throwing himself into ugly Irish slabs. Both, thankfully, seem a very long way away from the peace of this bucolic corner of Devon, but Alder will always be there, striving to support their athletes and the rest of us whatever the ocean throws at us.

A revolution in Rocinha: Another way out for the Rio’s favela kids
Science proves surfing is bloody good for you
Brazilian Storms
Threading the needle with Timmy Reyes: High speed greed
Share this...